10 longest bridges to drive across 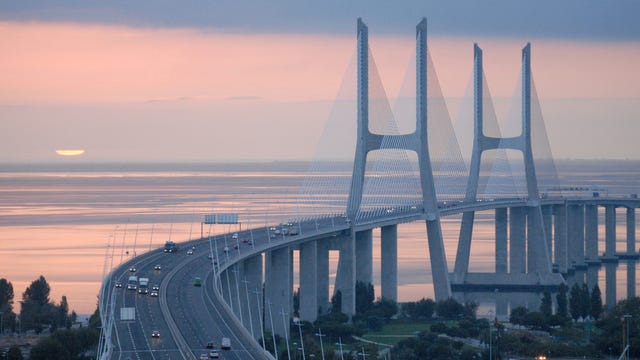 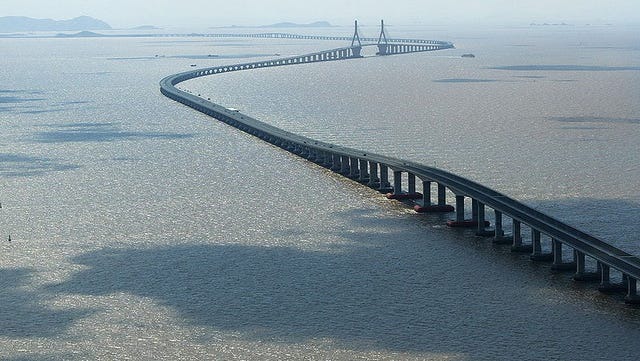 Lisbon's Vasco da Gama Bridge is the longest in Europe, spanning a total distance of 10.7 miles. Taking three years to complete, the bridge opened for traffic in 1998 to celebrate the 500th anniversary of Vasco da Dama's discovery of the maritime route from Europe to India. Designed to withstand 155 MPH winds and earthquakes over four times stronger than the strongest ever to hit Lisbon, the bridge is expected to carry traffic for 120 years.

Turns out that Samsung makes more than great smartphones. The famous Korean electronics company was also behind the $1.4 billion Incheon Bridge just outside of Seoul. If your travels take you to the capital city, you'll likely find yourself crossing this cable-stayed bridge on your way from the fabulous Incheon Airport to Seoul proper.

While the 6th October Bridge in Cairo is named after a single day -- the outbreak of the October War in 1973 -- it took more than 30 years to complete. Most of the 12.7-mile elevated highway passes over land, but the bridge does cross the Nile River twice, and with half a million people using it each day, it can sometimes take up to 45 minutes to stop-and-go from one end to the other.

Motorists making the trip from Norfolk to the Delaware Valley before the construction of the Chesapeake Bay Bridge-Tunnel would have had to drive another 95 miles. You can thank this combination bridge and tunnel for your extra hour and a half of time, along with the other 100 million drivers who've crossed the bridge since its opening in 1964.

When driving through Louisiana, it sometimes feels like you're never not on a bridge, especially when you're driving down I-10 between Baton Rouge and Lafayette. This stretch of highway passes over the Atchafalaya Basin, the largest swamp in the United States.

The 20.2-mile Donghai Bridge is one of the longest cross-sea bridges in the world, stretching from Shanghai to Yangshan across the South China Sea. Unfortunately, tourists in China aren't permitted to drive, so you'll have to enjoy this cable-stayed bridge from the comfort of a taxi.

While most travelers choose to see the Yangtze River from a cruise ship, you can also see it by crossing the Runyang Bridge on the Beijing-Shanghai Expressway just downstream of Nanjing. When the bridge was completed in 2005, it was the third longest suspension bridge in the world and the longest in China -- a country that knows a thing or two about long bridges.

The city of Hangzhou is most famous for its picturesque foot bridges in the West Lake area, but it's also home to a much bigger bridge, the 22-mile Hangzhou Bay Bridge. It took more than 600 experts 10 years to plan and design the cable-stayed bridge, and many of the offshore sections had to be built on land and transported out to sea.

Back in Louisiana, approximately one third of I-55 passing through the state is carried across swamplands on the Manchac Swamp Bridge. Since each of the concrete piles had to be driven more than 250 feet into the swamp, each mile of the bridge cost an average of $7 million to complete.

According to the Guinness Book of World Records, the Lake Pontchartrain Causeway is the longest continuous bridge passing over water, the waters of New Orleans's Lake Pontchartrain to be exact. The bridge is so long that for 8 of its 24 miles, you can't see land in any direction.

10Best provides its users with original, unbiased, and experiential travel content on top attractions, things to do, and restaurants for top destinations in the U.S. and around the world.

Exposed : See Recordings Of The Fight Between Sizwe & Unathi