Airlines banking on innovation for less emission amid headwinds

By [email protected] (self media writer) | 18 days ago 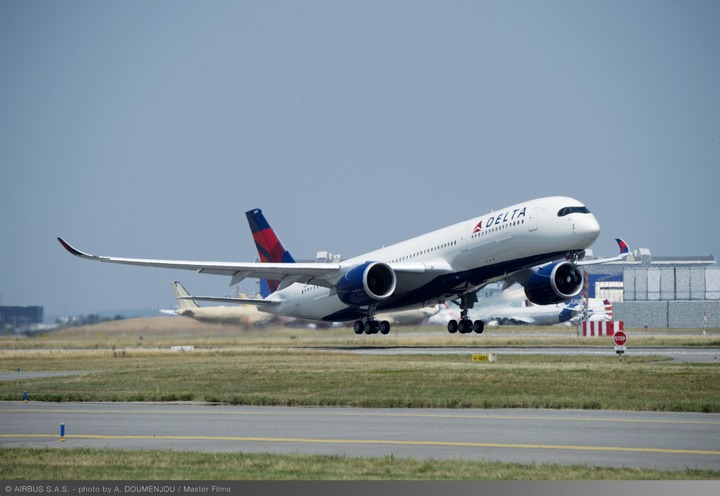 A Delta A350 aircraft takes off at an airport in Toulouse, France. Delta is the first US carrier to take delivery of A350 aircraft, which provides better fuel-efficiency features. CHINA DAILY

Global airlines are ramping up efforts to reduce carbon emissions and investing more in related projects, despite taking the brunt of financial pressures caused by the COVID-19 pandemic.

Over the next 10 years, Delta Air Lines, the top airline globally by total revenues, said it plans to invest $1 billion to mitigate all emissions from its global business. The Atlanta-based airline will invest in driving innovation, advancing clean air travel technologies, accelerating the reduction of carbon emissions and waste, while establishing new projects to mitigate the balance of emissions.

"There is no substitute for the power that travel has to connect people, which our world needs today more than ever before. It is our responsibility to deliver on our promise to bring people together and ensure the utmost care for our environment," said Ed Bastian, Delta's CEO.

Delta said it would reduce its carbon footprint by decreasing the use of jet fuel and increasing efficiency. It has an ambitious fleet renewal program, and it will improve flight operations and increase the use of sustainable aviation fuels.

Delta's carbon strategy will account for emissions of its business in the air and on the ground. The carrier has been the first and only US airline to voluntarily cap greenhouse gas emissions at 2012 levels. In 2020, it retired more than 200 older aircraft and renewed its fleet with aircraft that are 25 percent more fuel efficient than the ones it is replacing.

In addition to the airline's main business, it also plans to invest in investigating carbon removal opportunities through forestry, wetland restoration, grassland conservation, marine and soil capture, and other negative emissions technologies.

The program enables shippers and forwarders to power a share of their flights with sustainable aviation fuel, a cleaner substitute for conventional jet fuel, reducing carbon emissions by up to 85 percent of the total.

Sinotrans, headquartered in the economic zone near Beijing Capital International Airport, will offer a "green route" between Hangzhou, Zhejiang province and Amsterdam.

"This is a milestone that will push the strategic cooperation between the two parties to a new level," said Xiao Chenglu, managing director of Sinotrans Global E-commerce Logistics.

In 2019, global passenger and cargo flights together discharged 920 million metric tons of carbon dioxide. Emissions by passenger flights accounted for 85 percent of the total, and cargo flights made up for the rest, a report by the International Council on Clean Transportation said.

Among the total, the United States, China and the United Kingdom were ranked as the top three countries in volumes of carbon emissions from air transportation. Emissions by the three countries accounted for 39.2 percent of the global total in 2019, the report found.

Yu Zhanfu, partner and vice-president for China at consultancy Roland Berger, said air transport has been the fastest and most efficient way for human transportation, and it is irreplaceable in contributing to domestic and international economic and trade growth.

"Global carriers are expected to show a higher demand of new aircraft in the next two decades. Exploring and improving various methods for energy-saving and carbon emission reduction remains a highly challenging task, as the number of aircraft constantly increases," Yu said.

Since 2009, the State-owned carrier has sifted out more than 100 old aircraft with high emissions and its fleet is becoming increasingly younger.

China Eastern has also established a department dedicated to the work related to carbon reduction. In 2019, it became the first domestic carrier to introduce battery-free electronic baggage-checking tags, which allow passengers to track the luggage status on their mobile phones, at the Beijing Daxing International Airport. During the year, the airline invested 745 million yuan ($115.3 million) in carbon emissions reduction.

Annually, about 250 million paper baggage checking tags are produced in China, which requires a huge amount of special printers and disposable materials, costing over 100 million yuan.

At Beijing Daxing International Airport, the hub of China Eastern in the capital, 57 percent of the vehicles that China Eastern uses on the ground are new energy cars and all those for general-purpose are NEVs.