By far the oldest yacht on this list, Lady Moura was launched all the way back in 1990, but its allure hasn’t waned one bit over the years.

Owned by Saudi businessman Nasser Al Rashid, the ship cost about $200 million, with no expenses spared in order to make it as impressive as possible. Lady Moura is the epitome of elegance at sea, comfortable and easy to operate. As a further sign of opulence, its name and escutcheon are carved into the hull in 24-carat gold. 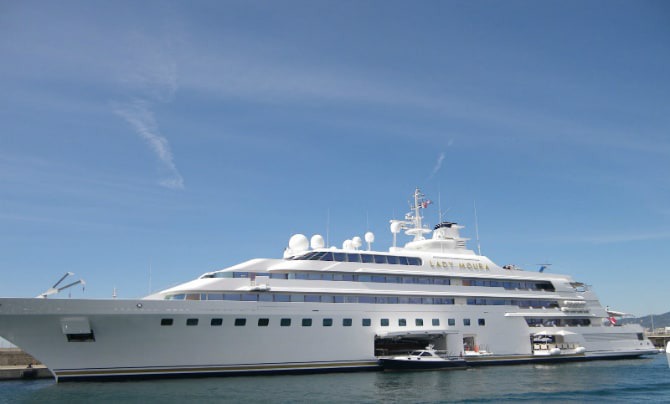 The huge Al Mirqab, with its elegant dark blue hull, is quite an awesome sight to see. Delivered in 2008, it cost Jassim bin Jaber Al Thani, former Prime Minister and Foreign Minister of Qatar, $250 million.

The ship is 436 feet in length, making it one of the largest ever built, yet can still achieve a respectable maximum speed of 20.3 knots. Al Mirqab has enough room for up to 24 guests in its 10 spacious guest suites, while the owner has two VIP suites at his disposal. Facilities on board include a cinema, outside bars, an inside swimming pool and an outdoor Jacuzzi, extensive sunbathing areas, and a helipad. 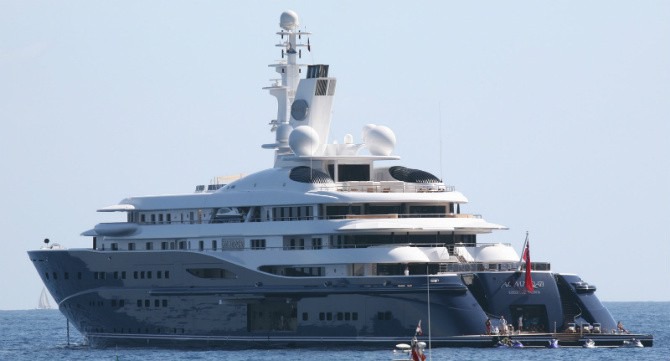 Alisher Usmanov is the richest man in Russia and one of the wealthiest in the world, so we would’ve been surprised if he didn’t own a floating palace (that costs more than an island).

Named after the businessman’s mother, the 361-foot Dilbar cost $263 million in 2012 and, like many of the world’s top boats, was the work of German shipbuilder Lürssen. There’s enough room on board for 20 guests and 47 crew members, while facilities include a helipad, swimming pool, and sumptuous formal dining room. 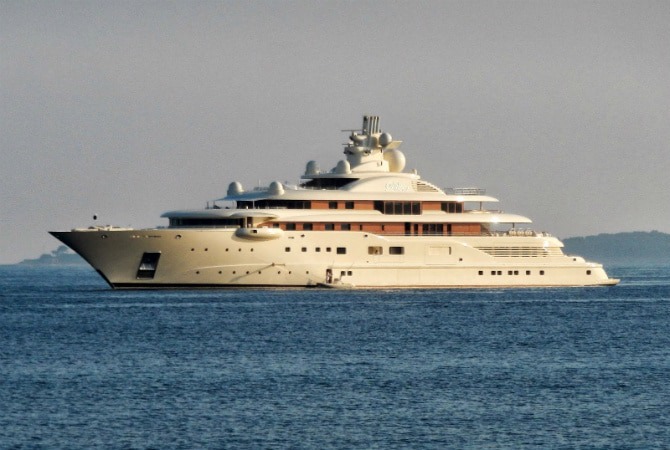 Radiant was initially built for Russian businessman Boris Berezovsky, however financial difficulties made him eventually give the boat up to Emirati billionaire Abdulla Al Futtaim for $286 million.

This superyacht comes with the luxurious facilities ships of this kind usually exhibit, but what makes it different is its impressive security system. Sonic guns can fire eardrum-bursting low-frequency sound waves and water cannons can sink approaching boats from up to 100 yards away. And if all this fails, there’s an escape boat capable of reaching a speed of 75 knots. 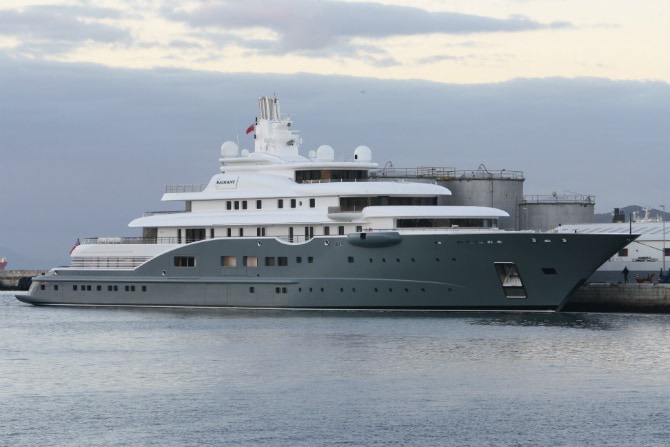 Commission by a Saudi businessman, Pelorus was sold to Russian billionaire Roman Abramovich in 2004, before being sold to entertainment mogul David Geffen in 2011 for $300 million.

The boat has two helipads (you know, because one helicopter isn’t impressive enough), two swimming pools, as well as number of smaller boats (jet skis, wave runners) on the tender deck. 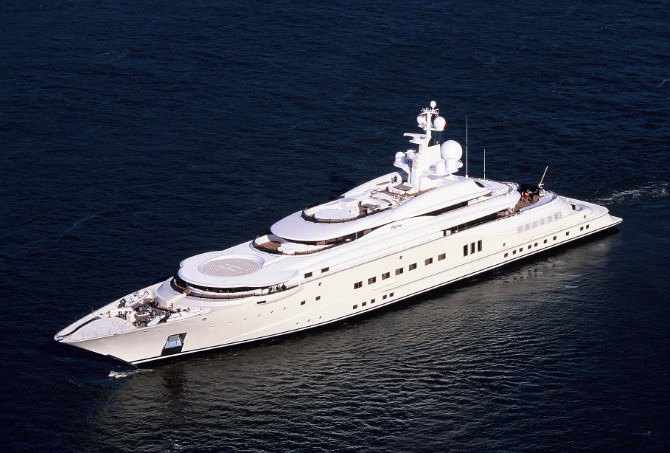 Dubai used to hold the title of most expensive yacht in the world and even though more money has been paid for a number of new boats, this 524-foot ship is still the third largest in the world and has seven decks, a squash room, a helicopter pad, and a mini-submarine.

No prizes for guessing the owner’s nationality – the yacht belongs to Sheikh Mohammed bin Rashid Al Maktoum, Prime Minister and Vice President of the UAE and ruler of the Emirate of Dubai, who paid $300 million for it in 2006. 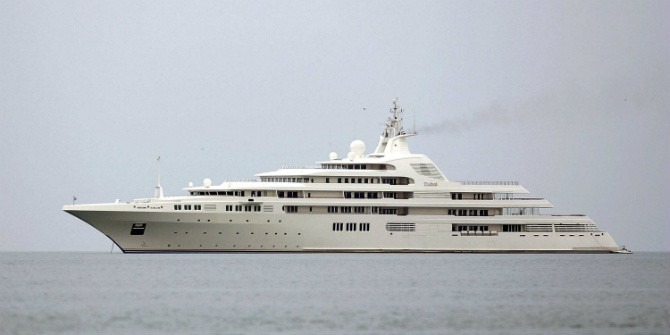 This isn’t the first time Russian billionaire Andrey Melnichenko is featured on one of our lists – he has also paid for one of the most expensive weddings ever, so it’s no surprise he’s willing to dig deep into his pockets for a really impressive boat as well.

Named after the initial shared by the owners (Andrey and Alexandra Melnichenko), A is an impressive 390-foot superyacht, especially thanks to its distinctive look, courtesy of world-renowned French designer Philippe Starck. Almost as impressive is the price Melnichenko paid for the ship in 2008 – $300 million. 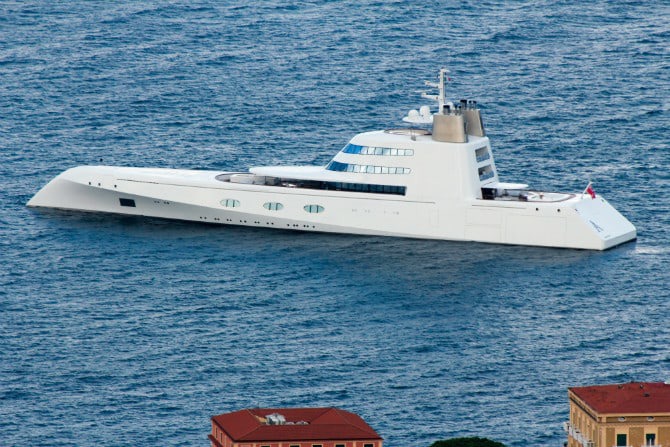 Mysterious Russian vodka tycoon Yuri Scheffler (the man who controls the famous Stolichnaya brand) was not being inconspicuous when he bought Serene. The 440-foot boat, with turquoise neon lights that glow in the dark, cost $330 million when it was delivered in 2011 – so it isn’t exactly hard to miss.

Serene is more of a floating mansion than a boat, with sumptuous staterooms, extensive indoor and outdoor pools, a children’s playground (which even has a climbing wall), as well as an outdoor cinema. 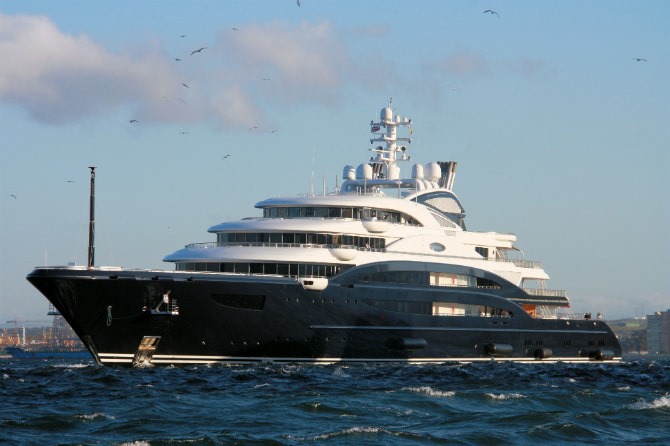 When it was delivered in 2010, the 536-foot-long Eclipse was the largest yacht in the world and is still a very impressive vessel even though it has since been narrowly overtaken.

Roman Abramovich paid about $485 million for the yacht to German shipbuilder Blohm + Voss. Eclipse features two helicopter pads (seems Abramovich likes to have two on his boats), 24 guest cabins, two swimming pools, a restaurant, and even a disco. Interestingly enough, it also comes with a mini-submarine, capable of submerging to 50 meters. 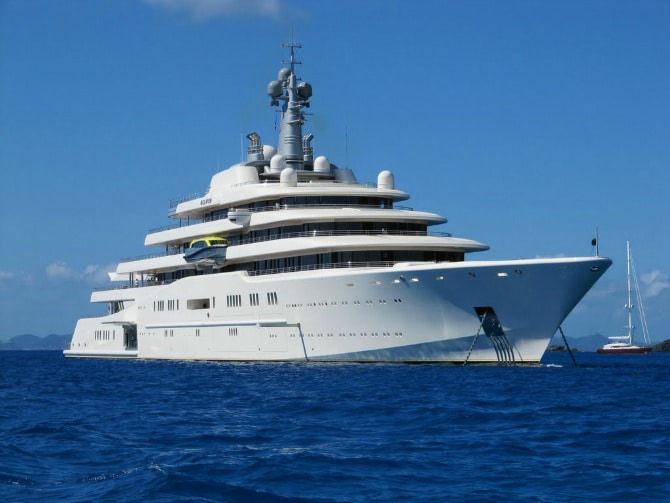 Azzam (which is Arabic for resolute) is the largest and most expensive yacht ever built, with an incredible length of 590 feet (almost the size of one and a half football fields). It took one year to design and three years to actually build – which is another world record you can throw in there.

Priced at a mind-numbing $627 million, it actually cost more than the most expensive island ever bought (the $500 million Larry Ellison paid for Lanai Island), yet it hardly put a dent in the finances of its owner, Sheikh Khalifa Al Nahyan. 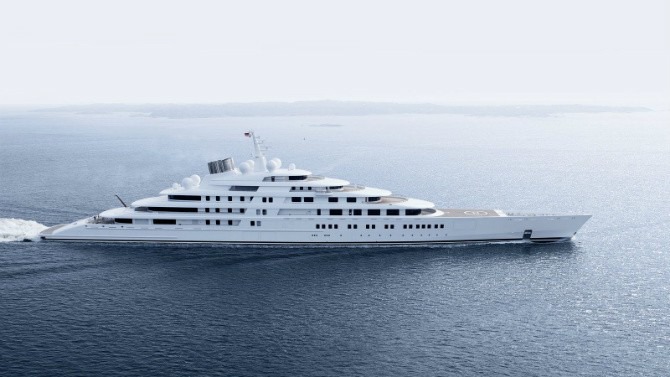