As the African continent offers ever more economic opportunities and unique places to visit, many of its burgeoning major cities are concurrently becoming more susceptible to crime.

Furthermore, in countries such as South Africa, where apartheid (the legal segregation of ethnic groups and races there from 1948 to 1994) was once a deeply ingrained practice, racial tension remains high, and xenophobia-related violence (that out of fear of those different than one's own self) often still occurs. Using the sets of crime indices Numbeo.com has created to compare global cities based on relative levels of crime, safety, law, and order, we have ranked some of the most dangerous cities in Africa.

Big cities such as Johannesburg, Durban and Cape Town have all witnessed a surge in poverty in recent years as more and more people migrate from rural areas in an effort to find jobs. The Eastern Cape, which includes the cities Port Elizabeth and East London, is the poorest area with 72.9% of residents in poverty. 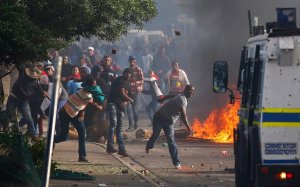 But the index does not reflect levels of crime. Its ranking is based only on the perceptions of people who have visited the Numbeo.com website and chosen to take part in a survey. The survey sample is limited to people who have access to the internet, understand English, and have an opinion about crime in South Africa.

Cities are responsible for a disproportionate amount of crime. The nine urban areas covered in the report are home to approximately 40% of the country’s residents, but they account for 77% of carjackings, 74% of vehicle thefts, 64% of aggravated robberies, 58% of residential robberies and 47% of murders. “These statistics show that cities are places not only of opportunity but also of inequality and high levels of violence and crime,” said SACN CEO Sithole Mbanga and GIZ-VCP programme manager Terence Smith.

Rustenburg City is in the North West Province of South Africa. It has very high crime levels, and is rated at 85.71 out of a possible crime score of 100, according to a 2015 Numbeo report. Of all of the cities in the North West Province in 2015, Rustenburg had the highest total cases of criminal activities with 11,117 cases in 2015, according to Crime Statistics South Africa. Household burglary, kidnapping, hijacking, and political violence are but some of the crimes that frequently occur in this city.

According to South Africa Dialogue, street crimes and muggings are also high in Rustenburg, and caution is necessary each and everyday. At night, car break-ins are common, and it’s not advisable to leave one's valuables inside a vehicle. When driving on the freeways at night, stops in undesignated areas make one an easy target for robbers, and hence it’s wise to avoid making them.