At the State Capture Commission, Deputy Chief Justice Zondo was listening to evidence from two travel agents from a company called Travel Excellence, Sameera Sooliman and Halima Allana. Sooliman revealed that she directly worked with Salim Essa and Anoj Singh, and serviced them as clients by booking their flights for them.

Sooliman revealed to the commission that she met Singh in 2014 who was introduced to her by Essa, and most charges were allocated to Singh's account. Whenever they had an outstanding account, either Essa or Singh would contact the travelling agency and tell them that a driver would be bringing their money, in cash.

She then reveals that in December 2015, she received an email from Essa and had asked her to make travelling arrangements for former Eskom boss Koko Matshela and two other members of his family, as they were flying to Dubai from Bali on the 6th of January 2016 and needed return flights to Johannesburg on the 20th January 2016, and the invoice was R100 000 which included visa upgrades for the trio. She explains that the expense was on Essa as the 'guarantor'.

Yet again, on January 20th Essa contacted Sooliman and told her a driver was coming to settle Matsheka's travel expenses.

However, on her affitdavit, Sooliman realized that there is a clause that is not hers, as this was written by an investigator and she was only asked to sign it.

Thus did not sit well with Koko, who has accused investigators of 'coaching witnesses to connect the dots", insinuating that witnesses are nudged to the truth by investigators. 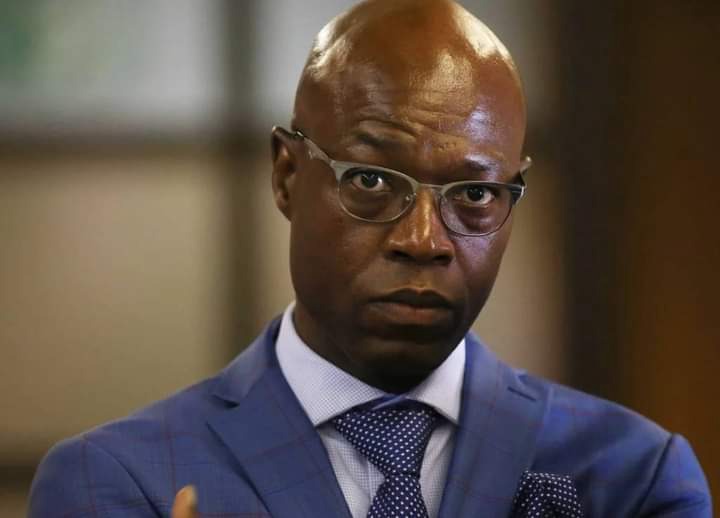 The error that Sooliman found in a paragraph on her affitdavit gave Koko more than enough reason to use it against investigators saying that if the error was made by him it would have been made a huge deal. 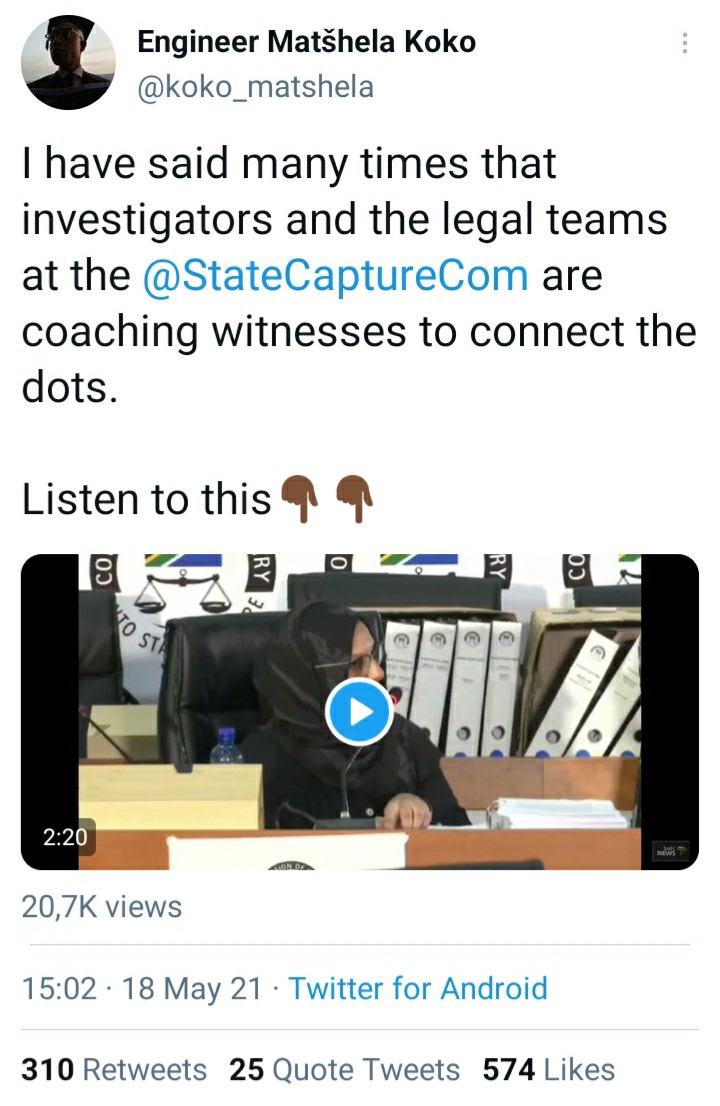 Koko further revealed e-mails, saying that they are of the R100 000 that was allegedly paid in cash for him. Except, the e-mails show that the payments were not made for Koko but for Salim, a 11-month-old baby and an additional adult. 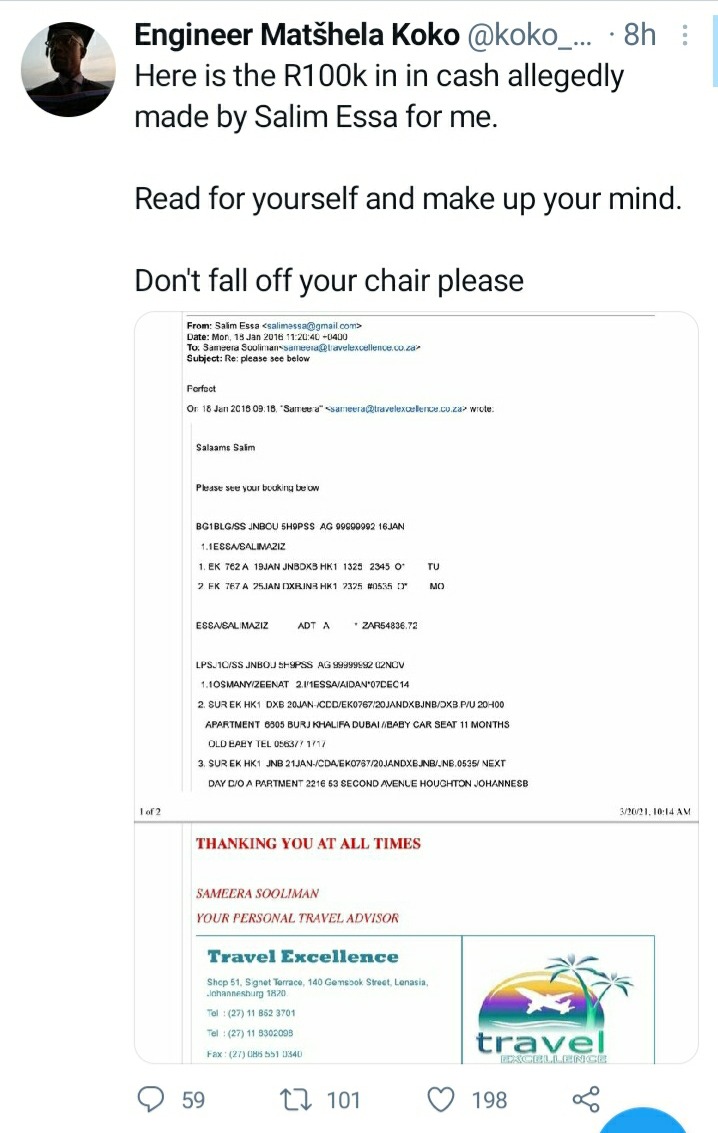 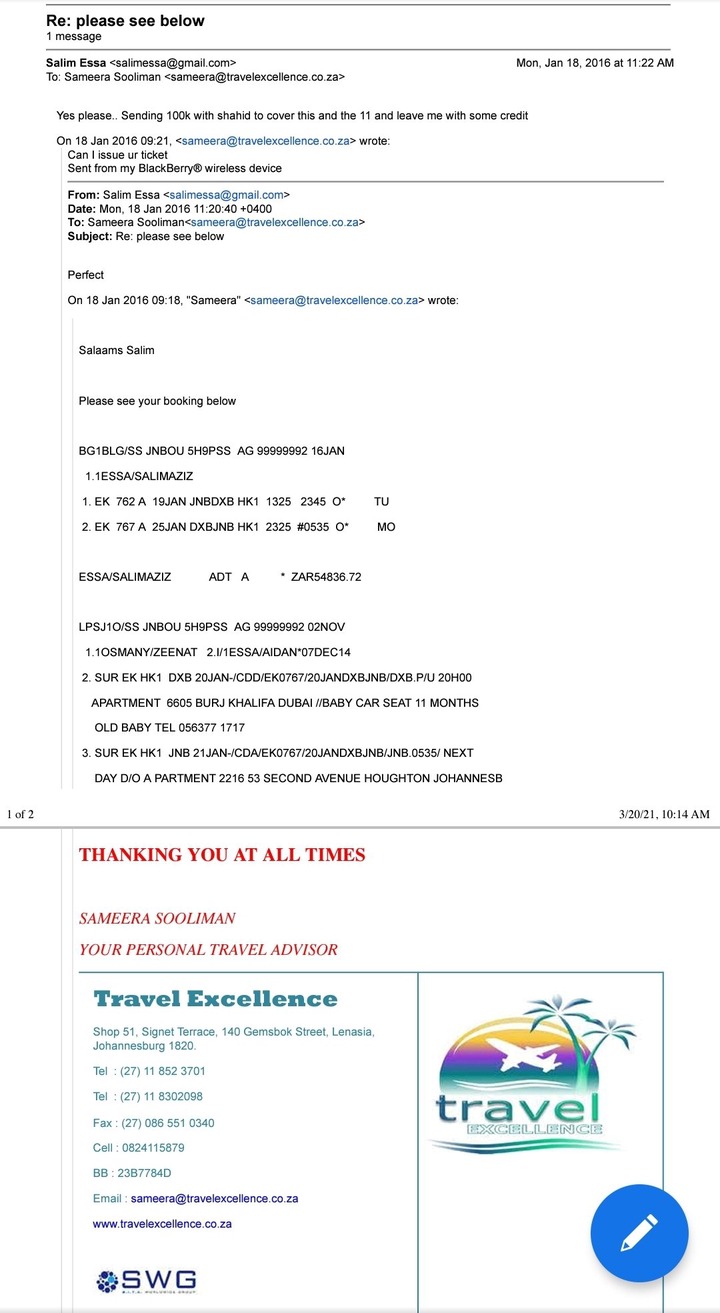 In essense, Koko says that nowhere in the emails was he mentioned and that the trips that were allegedly paid for him by Essa are non existent. He maintains that he paid his own trip, R350 000 and an additional R50 000 was paid in Dubai for the detour, and the proof of payment was presented to the Commission.