According to Google Maps Palestine is no longer a place

By UnarineMulaudzi (self media writer) | 1 year ago

Palestine is an area in the Mediterranean region and comprising of the parts of the modern Israel and Palestinian territories is Gaza strip and West bank. Gaza Strip is found in the coast of Mediterranean sea and West bank in the west area of Jordan river. Moreover the modern Israel used to form part of Palestine before the recognition of Israel as an official state by United Nation. On the 14th of July Palestine was no longer a place according to google maps. All those place that were under Palestine now are under the all mighty Israel.

It seems like USA its tactics of helping Israel to control Palestine has not stopped. However back in 2017 United States President Donald Trump announced that United States recognized Jerusalem as the capital city of Israel and it was the first country to move its embassy from Tel Aviv in 2018. 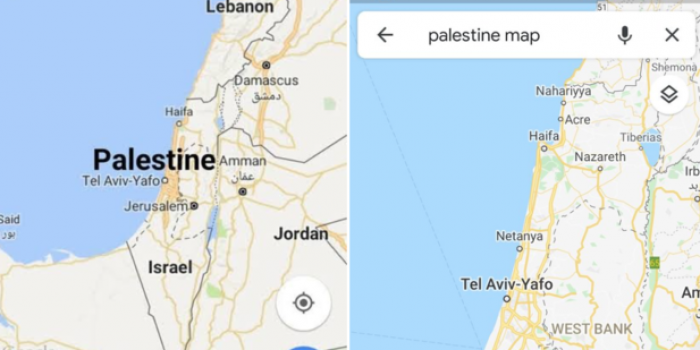 However After the broke out of Israel Palestine war United States of America was the first country to recognize Israel as a state. Today if you can go to Google maps and search where Palestine is located you'll never find it. Since the creation of Israel United States has provided financial support. Content created and supplied by: UnarineMulaudzi (via Opera News )