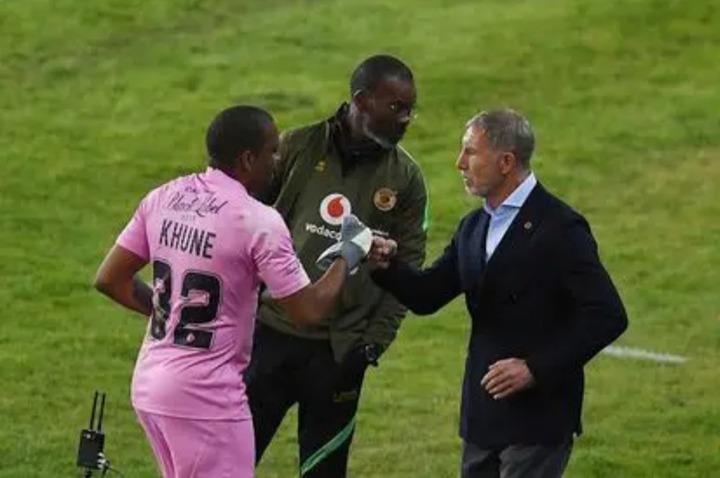 It was simply stated. According to Swallows FC coach Dylan Kerr, Kaizer Chiefs' Itumeleng Khune is the greatest goalkeeper in Mzansi.

KHUNE OF THE KAIZER CHIEFS IS THE BEST IN THE DSTV PREMIERSHIP, SAYS KERR.

The former Bafana Bafana number one has only played once this season, against Mamelodi Sundowns in the MTN8 in August 2021. Nonetheless, Kerr considers Khune to be the best glove-wearing player in the country.

Denis Onyango's biggest admirers are always eager to question Kerr's judgment, whether he meant was or one of the best.

Kerr informed the media before Saturday's DStv Compact Cup encounter, "We want to keep a clean sheet... that would boost our chances of winning the game."

"We have the best goalkeeper in the country [referring to Khune], so scoring against us will be difficult," he added.

In other Khune news, at his team's DStv Compact Cup semi-final, the former Bafana Bafana star offered supporters something to giggle about.

After being selected by fans for the Warriors FC, Khune returned to the field for the first time since August.

Warriors FC face Amabutho FC in the second semi-final, and the Kaizer Chiefs shot-stopper made supporters giggle with his play-acting in the first half. The complete story may be found here.

Strangest bedroom designs, take a look at the photos