I'll Do What I Feel It Right : Royal AM's MaMkhize 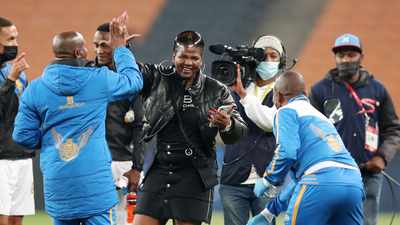 Royal AM president Shauwn Mkhize says she will do what "she feels it right" and she doesn't feel right after Sunday's cash-in-transit match after their win over Maritzburg United in the DStv Premiership became the talk of the country.

In the post-match video, MaMkhize and his son, the club's chairman, Andile Mpisane, were accompanied by other party officials with a pile of money, announcing the names of the players.

This is not the first time that MaMkhize and Royal AM have become controversial. Prior to the weekend's incident, they used to be seen on television cameras holding a speaker and dancing when the results went well for them on stage.

“Royal AM has always had problems and its problems will always be the same. I have never changed what people think but I will always do what I feel inside and what I think is right at the moment, ”MaMkhize told reporters in Durban earlier this week.

Royal AM finished second in the GladAfrica Championship last season, failing to advance to the top tier when they were repeatedly ousted by the courts in an attempt to prevent Sekhukhune United from being officially crowned champions.

SHe did not take advantage of the opportunity to try and get into winning the qualifiers as she chose not to participate in all of the games. It eventually made it to the DStv Premiership by buying Bloemfontein Celtic's permission to play in the top division.

It didn't start well in the top flight but things took a turn for the worse after the Fifa break as they managed to win four in a row, beating Chippa United, Kaizer Chiefs, TS Galaxy and Maritzburg, where the financial incident took place.

“I feel better and, as we have said, God has a time when he blesses you as if he were showing off. That is the time now, "continued MaMkhize.

“I am not a easily discouraged person, I do not think I am a failure and the people around me are always expecting the best. Unity is what helps us, we and the coach and the players are united. "

Meanwhile; MaMkhize and other party officials, including Mpisane, are expected to face a Premier Soccer League disciplinary committee as prosecutor Nande Becker told Sowetan Live that she would open a case against them in connection with Sunday's incident.

People forced Nandos to act and it took pressure.