On Tuesday, SuperSport United announced that they had parted ways with head coach Kaitano Tembo due to personal reasons. 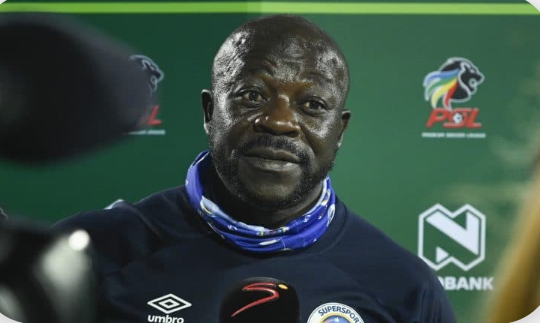 SuperSport, on the other hand, has struggled to find success recently, with the team winning just two of their last ten DStv Premiership games.

Despite the fact that Tembo is working with one of the youngest squads in the Premier Soccer League, their exit from the Nedbank Cup against TTM on the weekend appeared to be the final nail in the coffin.

According to a statement released by the club, "SuperSport United and Head Coach Kaitano Tembo have reached a mutual agreement to part ways, with Assistant Coach Andre Arendse appointed to the position for the remainder of the current Premier Soccer League season."

"Kaitano is the epitome of a dedicated club man," said Stan Matthews, the CEO of Matsatsansa, in a statement.

"Only a small number of players make the transition from playing to coaching at the same club where they played. We would like to express our gratitude to Kaitano for the many years that he has dedicated to SuperSport United in a variety of capacities.

"It's never easy to say goodbye to a friend, but Kaitano has always put the interests of the club ahead of his own personal interests as a true servant. It is with gratitude that I express my appreciation for his contributions to the club, both as a player and as a coach."

He had taken charge of 135 games, winning 55, drawing 38, and losing 42. Tembo had been in charge of 135 games. Throughout his career, Tembo has dedicated 23 years to the club, beginning as a player in 1999 before transitioning into a coaching role, serving as an assistant to Gavin Hunt, Stuart Baxter, and Eric Tinkler, and eventually becoming the club's Head Coach in 2018.

The MTN8 Cup Finals were reached twice by Tembo during his tenure as coach, with his first trophy coming against Highlands Park in 2019.