Arsenal's Class Too Much For Spurs

It was a first half blitz of goals from Arsenal that saw them destroy Spurs at the Emirates Stadium in front of 59 919 football fan's. I still wonder as to what is happening to Spurs? From starting the league on fire, Spurs had a reverse of fortune. On the other hand, Arsenal started off the season worst for wear but they slowly picked up the momentum. How strange is this - Arsenal have won their last three games whereas Spur's has lost their last three games. The first goal took only twelve minutes to materialize when Emile Smith Rowe scored for Arsenal. The pressure applied to Spurs brought dividends once again when Pierre-Emerick Aubameyang scored in the 27th minute. Harry Kane is getting worse since his blunder led to Saka scoring in the 34th minute.

It's no wonder that Spurs haven't won in the Emirates in the league since 2010. Graeme Souness stated in the Sky Sports Studio that Spurs first half display was 'shocking' and 'non-existent'. Kane could have had two goals but it wasn't meant to be with his woeful shooting. Fortunately, Spurs got a goal back in the 79th minute due to Heung-Min Son. Arsenal as it stands, leapfrog's Spurs into tenth place, one place above Spurs who are in eleventh place. Harry Kane just can't seem to get going and Spurs are reeling from this setback. Arsenal have reached their 600th premier league win and only the third side to do so behind Chelsea and Man United. Another unwanted record is held by Spurs since they are the second team in Premier League history to win their first three games of a season and then lose the next three. This feat was done by Everton in the 1993-1994 season where they finished 17th in the league. 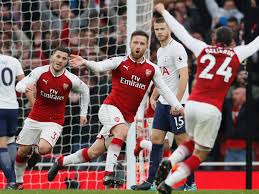