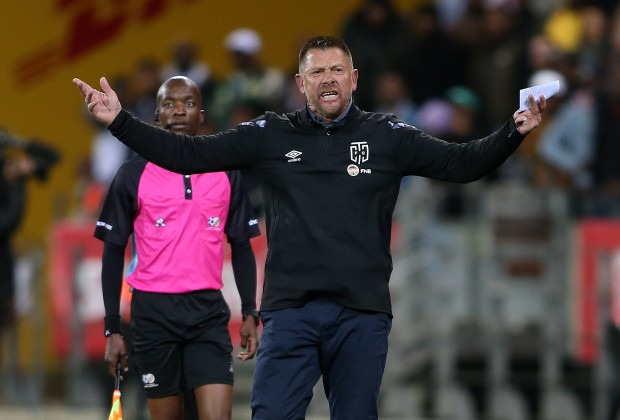 Eric Tinkler, the head coach of Cape Town City, has questioned a contentious refereeing choice that he believes played a part in his team's opening-day loss to Mamelodi Sundowns.

Eric Tinkler, the manager of City, was troubled by Sundowns' opening goal and questioned the official's decision to award a free-kick despite giving what he thought was a sufficient advantage.

In his post-game press conference, he said, "We didn't take our chances, and when you don't take your chances against a quality team like Sundowns, you eventually going to get punished.

"I believed that when they scored their first goal, the referee gave them the advantage. They took a shot, which my goalie stopped, but later, the referee called a foul. What would he do if they succeeded? Was he planning to return to the foul?

The reasoning behind that is beyond me. But things are what they are, and given their quality, it might be [Lyle] Lakay, [Audrey] Modiba, or any number of other people. They come from those set-pieces, and they are excellent.

We obviously discussed this before the game and decided not to commit silly fouls outside of our box. As a result, we were penalized.

"The second goal, I'll be honest, I was already considering changes so I didn't actually see how it occurred, but we talked about the threat in behind of [Peter] Shalulile or of the two tens who might make that run, and I believe that's where we caught the ball with hesitation and with Hugo [Marques] coming out for it.

But you have to be awake at that point.

You can't let yourself become complacent because the time right after conceding is crucial, and we weren't switched on during that time. They were able to score the second goal as a result of that.