Rangers are currently playing against Slavia Praha in the Europa league and are trailing the match 1-0 Live as Slavia scored early.

Rangers are currently trailing 1-0 in their ongoing Uefa Europa League fixture against Slavia Praha at home, as Slavia Praha scored a very early first half goal to lead the match 1-0. Rangers who has the home ground advantage in the match let open their defence as Peter Olayinka scored to give his side the lead in the match. Rangers and Slavia Praha is currently playing the second leg in the Uefa Round of 16, and with Slavia Praha leading the match 1-0 means that they have the aggregate advantage as they ended the first leg in a 1-1 draw, which means that Slavia Praha now leads 2-1 on aggregate. The match is now in the early minutes of the first half of the match and Rangers are known for scoring many goals in the second half of their fixtures. 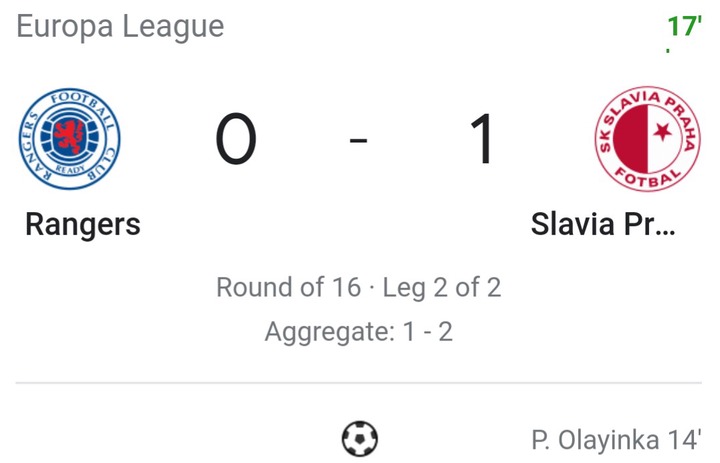 Slavia Praha opened the scoring very early in the 14th minute of the match when Peter Olayinka scored the opening goal of the match to lead at 1-0. Rangers now needs to score if they want to stay on in the Europa league as Slavia Praha after they scored their goal has an 2-1 aggregate lead in the two legged tie.