In Sa Coma, an employee of Cristiano Ronaldo was engaged in an accident.

This morning, at 11 a.m., the expensive car was involved in an accident.

The event is being investigated by police, but no further information has been released.

Cristiano Ronaldo's Bugatti is involved in a crash – One of Cristiano Ronaldo's two luxury automobiles that he had transported to Majorca for his summer vacation with his family was involved in an accident, in which his staff was also involved. According to multiple accounts, the £1.7 million 900 horsepower Bugatti Veyron owned by the Manchester United striker crashed in the east coast resort of Sa Coma.

The vehicle was allegedly driven by a footballer's employee rather than Cristiano himself at the time. I'm the morning around 11 a.m an accident occurred.

The front of the Bugatti is thought to have been smashed, but no other car was involved, according to authorities.

Near the Joan March Hospital, around 11 a.m., a car smashed into the entrance of a country house and into a butane bottle booth, which was entirely damaged.

The car's driver did not sustain any injuries and is thought to have signed an accident report.

The driver of the car did not suffer any injuries and is believed to have signed an accident report.

Cristiano jetted to Majorca with his five children and girlfriend Georgina Rodriguez on June 14. They are renting a luxury home at the foot of the Tramuntana Mountains and enjoying days out on Cristiano’s super yacht.

" The United Stand @ UnitedStandMUFC " felt the need to share this sight with the people on social media.

And so far managed to obtain a seazable amount of 226 retweets , 38 Qoute tweets and a whopping 4,618 likes. 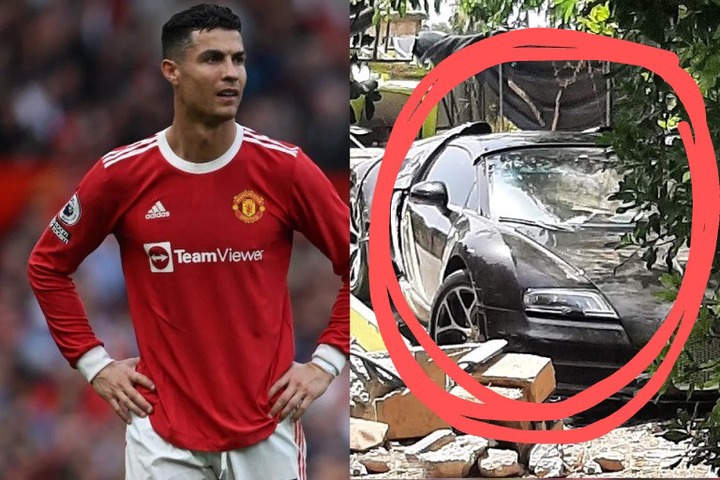