A Ronaldo-Less Man Utd bows out of the Carabao Cup

Man UTD's quest to cup glory of the Carabao Cup came to a halt at Old Trafford this evening when Lanzini's 9th minute strike put West Ham forward in a repetition of the EPL Fixture which was played less than two weeks ago with The Reds being victorious 2-1, thanks to strikes from Ronaldo and Lingaard.

A Man UTD starting VI without Ronaldo looked rather impossible for a win, West Ham had most possession of the first half and scoring on their first shot on target had The Reds in shambles trying to find an equalizer.

The second Half saw The Reds attacking much more than they had done in the first half but still to no luck had no clear goal scoring chance, an appeal from Sancho for a penalty after his shot struck West hams defender in the hand went unnoticed by the referee.

Chances by Yarmolenko and Noble could have sealed the game for West Ham in the last 10' minutes of the game, but Henderson kept them at bay and kept The Reds in the game.

Just like the past couple of seasons, The Reds are still yet to taste any cup glory as they bowed out 1- 0 to West Ham tonight. 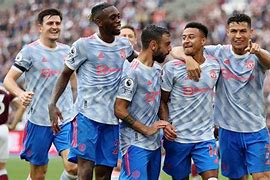 Content created and supplied by: Sikholiwe24 (via Opera News )