By PainkillerBibi (self media writer) | 23 days ago 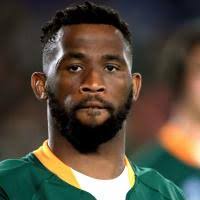 Siya Kolisi is one of the most significant figures in the modern game , being named rugby's most influential person of 2020 by Rugby World magazine.

Not only did he lead South Africa to their third Rugby World Cup title in 2019 , but he is also the national team's first black captain in their 126-year history.

Here are a few more facts about the irrepressible flanker.

Ten things you should know about Siya Kolisi

1. Kolisi was born on 16 June 1991 in the Zwide township in Port Elizabeth, Eastern Cape. He didn't not have a privileged upbringing , telling Rugby World in an interview that his favourite toy when growing up was a brick.

2.His parents were teenagers when he was born, with his mother dying when Siya was only 15. After this , he was rised by his grandmother .

3.Siya started rugby at the age of seven , following in the footsteps of several family members. His junior team was African Bombers , and he played for them for five years before he was offered a rugby scholarship to the acclaimed Grey College.

4.He didn't speak any English when he first arrived at Grey College, only fluent in his home language Xhosa. A classmate, Nicholas Hilton, taught him English and is still one of Kolisi's closest friends- he was best man at his wedding.

5. His professional career began at Western Province, whom he debuted for in 2011 against the Golden Lions in the Vodacom Cup. The next year we saw him claim a starting berth for the Stormers in Super Rugby , but a thumb injury made him miss Western Province's Currie Cup triumph that season.

7. He scored his first international try in Durban against France on 17 June 2017, the day after his 26 birthday . He managed to brilliantly intercept a ball around his ankles and streak away for the score , helping secure a 37-15 win.

8.Like the relationship between Nelson Mandela and Francosi Pienaar , there is a close relationship between current South Africa President Cyril Ramaphosa and Siya Kolisi. The two call each other after many Springbok matches and celebrated on the pitch after the 2019 Rugby World Cup triumph.

9. Alongside his wife Rachel, Siya runs the Kolisi Foundation, which aims to provide assistance and opportunities for South Africans from vulnerable and disadvantaged communities. During the Covid-19 pandemic, the foundation provided PPE to Frontline medical workers.

10. Kolisi has officially adopted his younger half siblings, Liyema and Liphelo . They now live with in the family home with his wife and their two children , Nicholas and Keziah.

The last days of 2021 could be deciding in AmaZulu's season

Here Is Why Healthcare Workers Have No Choice But To Vaccinate