On Wednesday, August 10, Orlando Pirates will play their first away game of the year when they travel to the Danie Craven Stadium to take on Stellenbosch FC in the DStv Premiership.

After a great first league outing at Orlando Stadium over the weekend, Jose Riveiro's team faces up against one of last season's success stories in this unusual test.

The Buccaneers face a Stellies team that had a disappointing season opener after being held to a scoreless draw by Marumo Gallants. The Buccaneers are one of the four teams to have earned all three points in the opening weekend of the season.

Orlando Pirates will be looking to build on their strong display against Soweto rivals Swallows on Saturday and improve their goal-scoring efficiency after only scoring one goal in their season opener.

After earning a point on the road, their rivals will be eager to earn their first victory of the year. Following a weekend of sparse scoring around the league, Stellenbosch is another team that hasn't added to their total under the "goals" column. 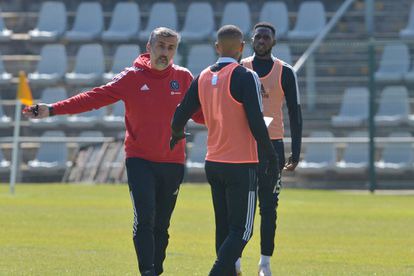 Juan Carlos Otiz, a midfielder from Venezuela, was absent for Stellies' goalless draw with Gallants because he was still healing from a knee injury sustained around the conclusion of the previous season. On Wednesday, the 28-year-old is most likely to sit out.

Coach Steve Barker might give debuts to players like international William Likuta from the Democratic Republic of the Congo, who joined the team before the new season began. Orlando Pirates' technical staff could potentially shuffle the group for their midweek task with a brief turnaround between games in order to keep some legs fresh for what is a busy fixture calendar.

Players like Olisah Ndah, Kwame Peprah, and Bandile Shandu missed the victory over the Swallows on Saturday but could play on Wednesday. Miguel Timm and Evidence Makgopa will both be hoping to make their Buccaneers debuts.

Deon Hotto (Orlando Pirates): The Namibian international, who scored three goals against Stellenbosch last season, seemed to like playing against them. Hotto, who has the speed to worry any defender, poses a threat both during open play, where he generates and converts opportunities, and during set pieces, where his reliable left foot can work its magic from seemingly impossible angles.

Stellenbosch FC's Junior Mendieta: Stellenbosch will be happy to have kept the Argentinian thus far after saying goodbye to a number of their stars throughout the summer, as the player has been the attacking engine for his team. The 29-year-old, who is capable of playing on either wing or in the middle, has made significant goal contributions for the Club, and a strong showing from him in midweek might spell a busy afternoon for the Bucs defense.