Thousands of people have signed a petition demanding that referee Anthony Taylor be prohibited from overseeing Chelsea games following Sunday's tense encounter that finished in a 2-2 tie against Tottenham.

The change.org petition claims that Anthony Taylor "has continued to make huge judgements against Chelsea throughout the years in big matches," and as of this writing, about 16,000 people had signed it.

Taylor "should not be permitted to referee a game featuring Chelsea again because he has an agenda against the team."

The originator of the petition continues by listing a number of complaints they have about Taylor and referencing instances that, in their opinion, "show" he shouldn't be permitted to officiate club matches.

They featured both of Tottenham's goals from Sunday at Stamford Bridge, when Harry Kane's injury-time equalizer saved a point for the guests.

After that, Spurs was granted permission to take a corner, from which Kane scored their equalizer.

Additionally, there was debate around Tottenham's first equalizer of the game, which was scored by Pierre-Emile Hojbjerg but was upheld despite Richarlison's offside position.

After reviewing the incident with VAR Mike Dean, it was determined that the Brazilian striker wasn't obstructing Chelsea goalkeeper Edouard Mendy's view.

Kalidou Koulibaly and Reece James had given Chelsea the lead twice in the game, but they ultimately had to settle for a draw in a contentious game that saw Blues manager Thomas Tuchel and Tottenham's former Chelsea manager Antonio Conte receive red cards after shoving on the touchline after Hojbjerg's goal and again at the end. At the end of the half, Tuchel acknowledged that he did have an issue with Taylor.

When questioned if the supporters had a right to object to his choices, he responded, "Absolutely.

"I can promise you that the entire dressing room believes that; it's not just the supporters. I find it incomprehensible how a player can be yanked by the hair during a corner or why the first goal is not considered a foul.

Conte and Tuchel fought after the game. (Photo by Getty Images )

"I'm interested to know the explanation. Both goals by [Tottenham] shouldn't stand.

Regarding his altercation with Conte, he continued, "I merely likened it to two players fighting on the field. 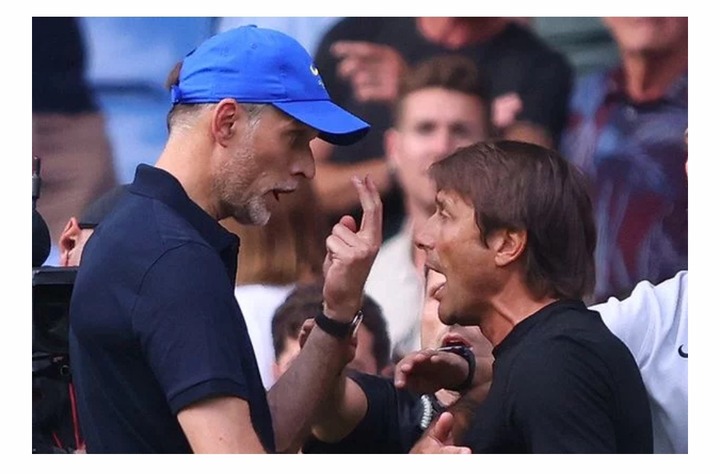 If you made a hard, long tackle and then went to apologize. We were both battling alongside our teams. No one was abused, and no one was wounded. It wasn't a big deal for me.

Four Lives Wasted, Two Others Injured in an Accident Involving Collision of Two Vehicles in Limpopo

Palesa Chubisi recent looks took Mzansi by storm as she is gushing over her son.