By Moroke (self media writer) | 1 month ago 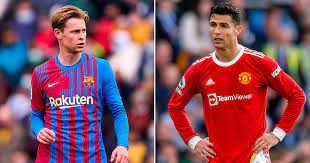 The Premier Soccer League is about to begin this weekend as other clubs did made their transfer before the season start, while others are still looking for fresh legs to bring on the field. However is not easy for teams like Chelsea and Manchester United to get the players they want as they struggle both to get De Jong however Manchester United have reach an agreement with Barcelona to sign the player, however De Jong refused to join Manchester United, because he want to stay at Barcelona, because he love the club and it his dream club.