Buccaneers secured their first win against their rivals

Orlando Pirates secured their first win of the DStv Premiership season with a 1-0 win over Swallows FC in the original Soweto derby on Saturday afternoon. 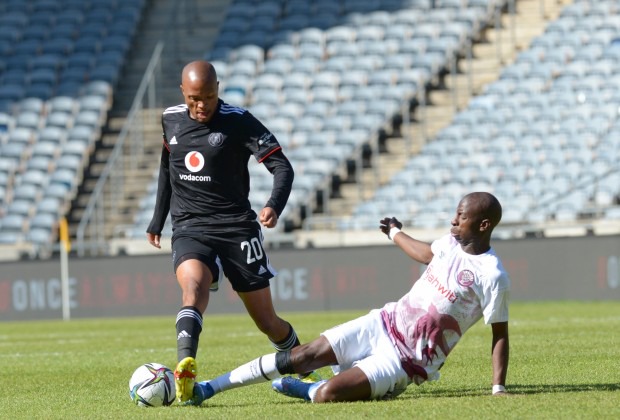 Ntsako Makhubela made his debut for the Pirates, who also named goalkeeper Siyabonga Mpontshane, Paseka Mako, and Thulani Hlatshwayo, while the Swallows used Sanele Tshabalala.

Swallows came close to breaking the deadlock thanks to a play by Dillon Solomons, but Monnapule Saleng was unable to connect with the cross.

With a good shot from a decent area by Vincent Pule and a free-kick after a foul on Pule missing target, the Pirates launched a punch of their own in the final minutes of the first half.

Pule had a clear shot on goal late in the half following a smart delivery, but he was denied from close range and had to settle for a shot outside the box.

Following the break, both teams were unchanged, and Pirates came within inches of taking the lead when Dlamini's cross trickled to Abel Mabaso, but the versatile player missed the target.

Bandile Shandu went on a mazy run only to be stopped, and Mpontshane blocked a free-kick by Ruzaigh Gamildien at the opposite end.

Before the 60th minute, the Buccaneers made a double substitution, substituting Terrence Dzvukamanja for Kabelo Dlamini and Deon Hotto for Tshegofatso Mabasa.

When Mabasa barged free 12 minutes from time to send a pin-point cross from Pule beyond a rooted Tshabalala, Pirates made their dominance count.

The Buccaneers got their first win of the season, denying the Dube Birds the chance to jump to the top of the standings