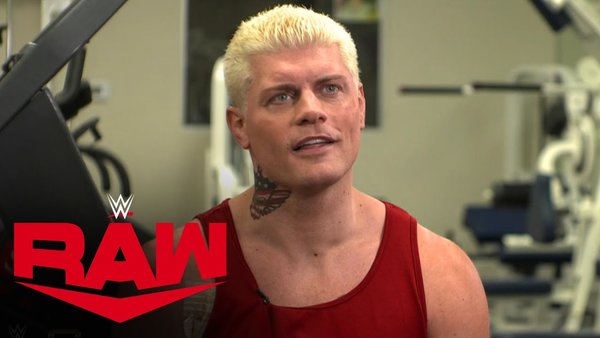 Cody Rhodes made his first WWE Raw appearance in several weeks last night, touching on a number of topics relevant to his current situation in a pretaped gym interview.

Amongst other things, Rhodes spoke on the momentum lost due to his torn pectoral, which, by WWE's narrative, is expected to sideline the WrestleMania 38 comeback king for around nine months. Cody said that although he once sought to turn that momentum into a Money In The Bank win, he is attempting to respect his doctors' prognosis.

The 36-year-old suffered the injury prior to wrestling Seth Rollins at Hell In A Cell 2022, but competed against his rival sporting a gruesome bruise regardless.

On Money In The Bank 2022, which takes place this Saturday (2 July), Rhodes put a handful of competitors over before stating that if Rollins is to win, he will be the first person to congratulate him. The segment ended shortly afterwards.

Rhodes has gone 3-0 against Rollins since returning to WWE at 'Mania, defeating Seth at 'The Show of Shows', WrestleMania Backlash, and Hell In A Cell. Rollins attacked the injured 'American Nightmare' on the Raw following HIAC, keeping their well-received feud going.