Tshakhuma and Leopards share points in the Vhembe derby

THOHOYANDOU : The highly anticipated Vhembe Derby at the Thohoyandou Stadium in Venda on Tuesday afternoon failed to produce a winner. 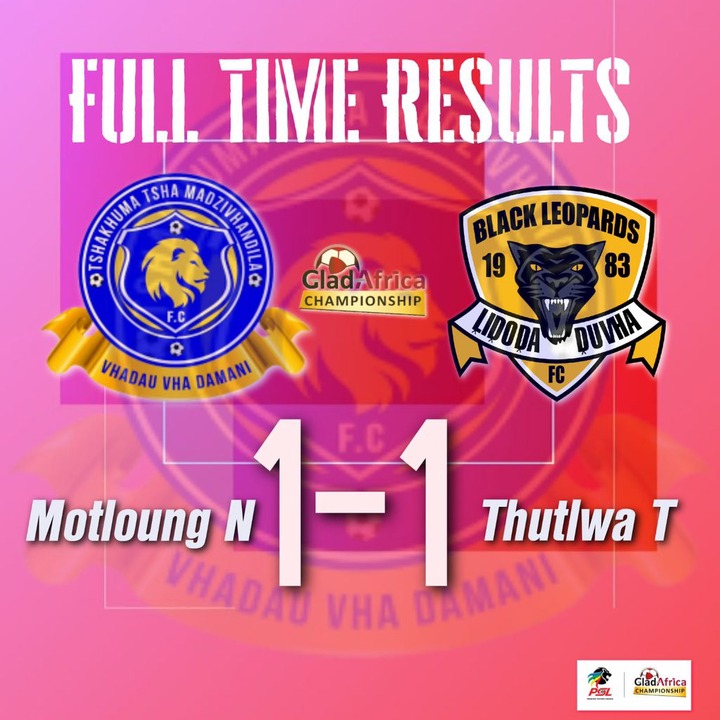 This comes after both Tshakhuma Tsha Madzivhandila and Black Leopards shared the bragging rights in Vhembe after playing to a 1 - 1 stalemate in matchday 5 of the Glad Africa Championship.

In the 36th minute, Nicholas Motloung broke the deadlock for Tshakhuma Tsha Madzivhandila to give the home side the lead heading into the interval.

Tshakhuma went to the half break with their noses in front.

In the second stanza, it was Leopards that came back stronger and started asking questions of the Tshakhuma defense, pushing for the equalizer.

Inevitably, Leopards leading goal scorer this season Thiklas Thutlwa pulled Lidoda Duvha back in the game with an equalizer.

The equalizer proved to be what Leopards needed to salvage anything in the Derby game as they failed to breach the Tshakhuma defense and the game in a stalemate.

The draw meant that Morgan Shivambu's charges occupy 8th position on the Glad Africa Championship standings with six points from the five games played this far.

The stalemate in as far as Tshakhuma is concerned, it means that they remain winless in their last four games and still occupy 12th position with five points from the same number of games.

Heading to matchday 6 in the league, Vhadau Vha Dhamani will next up travel to Brakpan to tackle bottom side Jomo Cosmos at the Tsakane Stadium on Saturday afternoon, looking to break the four game winless streak.

Lidoda Duvha will return to their temporary home, the Old Peter Mokaba Stadium in Polokwane to prepare for the visit of Pretoria University on Sunday afternoon.

Interestingly, Leopards are yet to win a home game this season after relocating from the Thohoyandou Stadium following disagreements with the Thulamela Municipality.