Was Royal AM correct to throw-out money on the pitch?

By Phillipkitimi (self media writer) | 22 days ago

Source: POLL | Was Royal AM right to dish out cash on the pitch? (timeslive.co.za) 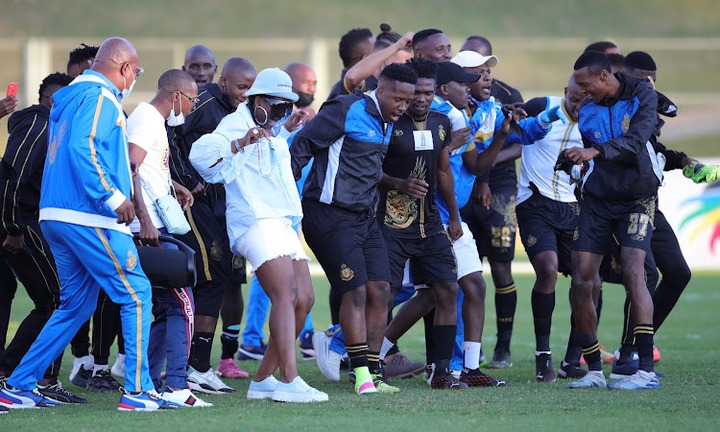 A video of Royal AM executives and Shauwn "MaMkhize" Mkhize handing out cash to their players following their win went viral on Sunday.

Mkhize and her son Andile Mpisane are shown strolling onto the pitch with an envelope full of cash, handing the money to the players in front of the cameras.

“Come get your sweets,” one person can be heard yelling.

Royal AM defeated Maritzburg United 2-1 at Chatsworth Stadium, resulting in the handover.

This isn't the first time Royal AM has had a contentious moment after winning a match.

Mkhize and Mpisane were seen dancing around a Bluetooth speaker at the stadium in videos released at the time.

Mkhize, who took to social media to celebrate the win, saying the players "fought their hearts out."

“My team gave it their all and came away with three points. As your president, I am incredibly proud of you. Thank you for your dedication and teamwork. “Well done to our man of the match Victor Letsoalo. You guys got the brief: united we stand, divided we fall. Mkhize congratulated Mkhize on his performance.

Victor Letsoalo can't stop scoring now, and his fairy-tale start to the season continued Sunday afternoon when he led Royal AM to a 2-1 league win over regional rivals Maritzburg United at Chatsworth Stadium.

After a tense first half, Letsoalo finally broke the deadlock in the encounter in the 70th minute when he connected excellently with a perfect cross from Tshidiso Monamodi and beat goalkeeper Marcel Engelhardt with a well-taken header.

He outmuscled all three players to score his fifth goal of the season, highlighting his importance to Royal as they continue to defy the odds in their first season in the Premier League.