'See what Sundowns coach said about Kaizer Chiefs, ahead of the clash against them.

See What Kaizer Chiefs' Coach Said About Them Before The Match Against Sundowns. 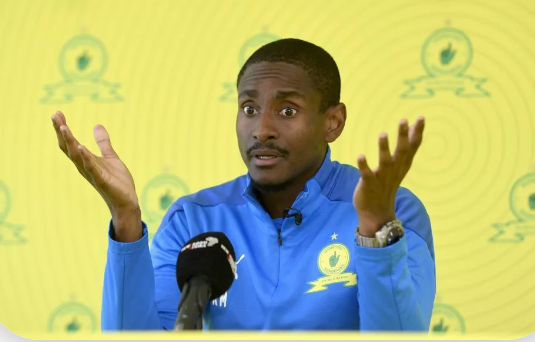 Speaking at the Sundowns' open media day before this afternoon's crucial match at Loftus Stadium, Mokwena expressed her views.

According to Mokwena, Naturena has undergone significant transformation over the last few months, and it is obvious that the club is moving in a new path.

“Ja, but there’s a huge metamorphosis,” Mokwena told the media.

“It’s not even a change, it’s like the team has taken a different direction and particularly from the vision that the club you can see has set, when you watch them now, the strategy in the transfer market is also to get younger players like Nyaope [Kamohelo Mahlatsi] and [Dillan] Solomons.

"Players like Rama, Parker, and Mathoho would have been heavily relied upon under the previous three managers, as you indicated, but it appears that the cycle is shifting. The way the vision was established from the top is changing.

"As a result, that influences a lot more things, such as the choice of the coach, who is Arthur, and he knows the DNA of the club." He played for the club, worked in the academy and youth structures, and worked as an assistant to many of the coaches you mentioned.

That influences recruitment policies, because you've seen the transfer market now, even when certain bigger players are available, they've resorted to going for Yusuf Maart and [Ashley] Du Preez, who are relatively a lot younger than what would be available for Chiefs in a normal context of a couple of years.

They are a major club, so it's intriguing to see, and it's excellent for South African football. They have an excellent team and a competent coach. And the team they currently have is one that is capable of engaging in the high-octane, aggressive pressing they refer to.

"And you can see the goals that Maritzburg scored. There might not be a mistake and Keegan Dolly won't have the opportunity to score if Yusuf Maart doesn't sprint out of midfield and go push relentlessly. But it also occurred in the first goal. When the middle line joined the front three, they did it aggressively. However, you must have players who fit the correct profile to be able to do that...

"So it's encouraging to see that the goal, recruitment, and playing methodology styles are in line. And while we are aware that we have a very challenging encounter ahead of us on Saturday, we relish these types of contests and possess the required experience to handle them.