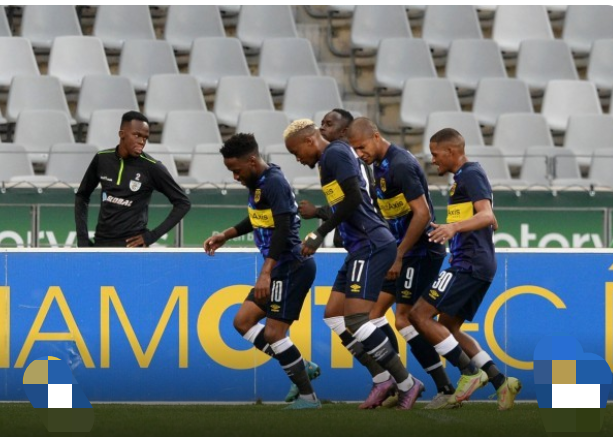 After a shaky start, Maritzburg began to find their feet and created their first opportunity on 12 minutes when Friday Samu scored from outside the area following a shot on the turn.

However, the Citizens could have taken the lead two minutes later after a cross from the right of the area went all the way through to Morris, who attempted to convert but drilled his effort wide of the target.

After a second delivery out right from Khanyisa Mayo dropped perfectly for Thabo Nodada, who stung the gloves of Marcel Engelhardt in the middle of the first half, City created even more danger.

The Citizens' dominance was rewarded in the closing minute of the half when Mayo instructed Engelhardt in the opposite direction from the penalty spot after a foul by Keegan Ritchie on Thamsanqa Mkhize resulted in a penalty kick.

Ryan Rae, Daylon Claasen, and Steven Pereira were all introduced as substitutes for Ismail, Palace, and Tawonda Macheke, respectively, as part of Ernst Middendorp's triple substitution right at the start of the game.

Following the introduction of the new players, the Team of Choice seemed more invigorated, as a speculative strike from distance by Claasen flew wide of the goal, while Nodada got close for City shortly after.

With five minutes remaining, Pereira fouled Mogamat May in the box, resulting in another penalty for Maritzburg. However, Mayo was unable to make it two goals from two penalties as he struck the post.

City were unconcerned about the missed opportunity and continued their pursuit for a second goal after the final seconds, but they were still victorious by a 1-0 score.

House Of Zwide:Molefe Continues To Hide Isaac From The Family See What Will Happen