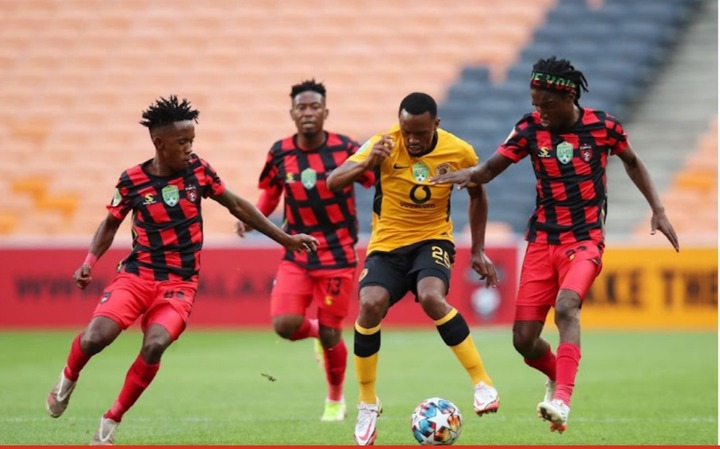 Stuart Baxter explained some of his team's controversial selections in Saturday night's 0-1 Nedbank Cup last-32 loss to TS Galaxy at FNB Stadium as an attempt to get Kaizer Chiefs' "in-form players on the pitch."

The Chiefs were noticeably rusty in the first half, as Galaxy showed greater tenacity after returning from a two-month Christmas and Africa Cup of Nations vacation, and playing to coach Sead Ramovic's brilliant gameplan.

Coming out of the locker rooms, Amakhosi showed a definite desire to improve their transitions, but Phathutshedzo Nange's gaffe with an intercepted back-pass awarded Augustine Kwem the game's first goal, leaving Chiefs chasing the game.

Baxter appeared to wish to keep some of the players who had done well for the reduced teams that had won two and lost one of their three games during the club's Covid-19 outbreak in December, and Siphosakhe Ntiya-Ntiya made only his fourth league start at left-back.

Even though the Chiefs' momentum increased in the second half despite losing the goal, the additions of rusty Samir Nurkovi, Leonardo Castro, and Lebogang Manyama — all returning from long injuries — almost seemed to counteract that progress.

Baxter remarked that the team's overall performance was uneven and much below that of the Chiefs.

"We didn't play with the quality we have at any point." "Our training had been excellent this week, and I was confident that we'd put on a better show than that," he remarked.

With just over half an hour to go, the coach was asked about Nurkovic and Castro's introductions, as well as Manyama's with 20 minutes to go.

"We didn't start Samir, 'Lebza,' or Leo for that reason — because they aren't 100 percent match fit," the coach explained.

"We went with a little altered formation to get our in-form guys on the pitch," he explained. So 'Mshini' had that role in the pocket from which he could attack their defense.

We had 'Siya' [Ngezana] at right-back, who would stay a little further back and allow Ntiya to charge forward.

"However, even the in-form players didn't play to the level of quality that we know they are capable of." So you gradually work your way up to what you know — that Samir can give you 30 or 40 minutes, and that Leo and Lebza can.

"Let's try a different shape and personnel if this one doesn't work." We had to try to reclaim the game.

"And, despite not playing with the quality I know we have, we still gave up a dreadful goal and squandered a few more-than-decent chances."

"So that could have easily been a poor performance, a horrible day at the office, but we made it through because we took a chance and played a set play."

"However, once you concede that first goal in the cup, you risk seeing what we saw tonight - they run down the clock, injured players, goalkeeper takes his time and disrupts the rhythm."

"Basically, we didn't demonstrate the level of quality we have."

If the coach's selections prompted issues on a mixed first day back at the match office for Chiefs, one that did not was that of 27-year-old Brandon Petersen, who was elevated up the pecking order above Bruce Bvuma after a strong debut between the posts.

Mpiloenhle Mseleku left Mzansi in frenzy after sharing these pictures

Musa Mseleku speaks out about his battle on getting his wives to agree on wife no.5