By ElisaShantee (self media writer) | 8 months ago 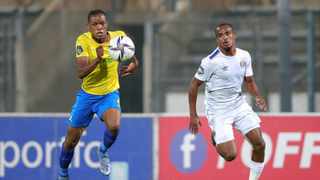 The post-match comments from both camps in Saturday night's Tshwane Derby emphasized the frustrating weakness that has occasionally characterized Mamelodi Sundowns' performances in recent months, dating back to the conclusion of last season.

SuperSport United were defeated 1-0, despite fielding a significantly under-strength team that was missing coach Kaitano Tembo and numerous regulars, including star captain Ronwen Williams. They were all knocked out by the epidemic, and other players from the reserves were called up.

Despite that defeat, SuperSport gave the unbeaten champs a run for their money under stand-in coach Andre Arendse. Following that, Arendse thought his under-strength team deserved a share of the spoils because they gave such a good account of themselves.

"It's a difficult pill to swallow because I thought we deserved something just for our efforts." "Arendse stated. "I think everyone gave it their all to the point where we had to make substitutes due to cramping and injuries."

"The only way we were going to get those opportunities was to press them high and united, which we did.

We kept them in particular areas of the game and, for the most part, we created something when we did win balls."

Manqoba Mngqithi, Sundowns' co-coach, stated his squad made light work of the win and made some dumb errors.

"It was a game that started nicely, but SuperSport received the first attempt at goal from Onismor Bhasera in the first three minutes, which was a snapshot in front of our defense."

"We gathered our thoughts after that. We came back stronger and were able to score (through Peter Shalulile). Then we tried to crank up the octane a little more."

The loss of Thabiso Kutumela, who was stretchered off in the first half, was a major setback for Mngqithi.

"It was terrible that we lost Thabiso Kutumela, who was quite prominent in our high press," Mngqithi remarked.

After he left, we began to give Jamie Webber and Kegan Johannes (both SuperSport) a little more space and time, and they made our life difficult. When Webber quickly finds the right back and Johannes easily finds the left back, it creates a game in which you must try to deal with them in wide channels.

"Overall, I believe SuperSport gave a really excellent performance." They were difficult to deal with. (Moses) Waiswa performed well and took some solid shots.

"(Thamsanqa) Gabuza was always useful, and Webber played an important role in their aggressive play." It's important to recognize that we got three points, but the truth is that it wasn't simple."