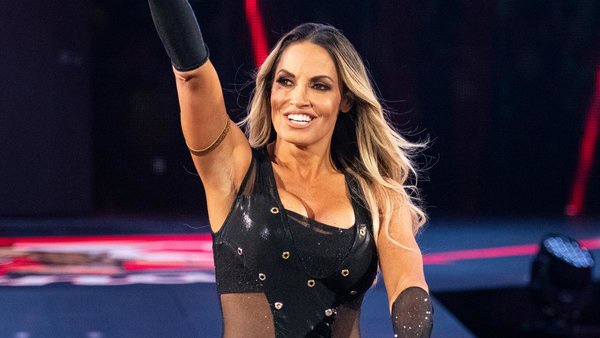 Trish Stratus has confirmed she will be at a couple of WWE house shows this weekend.

The Hall of Famer announced the appearances in Kingston and London, Ontario through her official website:-

A stratusfaction weekend awaits! Trish Stratus will be appearing at both Saturday’s Night Main Event and Sunday Stunner during WWE’s stop in Canada this weekend. What might the WWE Hall of Famer have in store? Get your tickets today! SATURDAY NIGHT'S MAIN EVENT Saturday, August 20 | 7:30 PM Leon's Centre Kingston, ON Get tickets » SUNDAY STUNNER Sunday, August 21 | 7:00 PM Budweiser Gardens London, ON Get tickets »

These will be Stratus' first WWE appearances since March, when she was a guest star at another set of Canadian house shows. Her duties as host involved appearances alongside Becky Lynch and Rhea Ripley - as well as a spot on Kevin Owens' "TKO Show."

What Trish will be doing on this weekend's shows is currently unclear.

A seven-time WWE Women's Champion, Stratus last wrestled in August 2019, when she was defeated by Charlotte Flair in a billed "farewell" match at SummerSlam. She has since spoken up about the possibility of competing again, with Sasha Banks frequently teased as an opponent.

The Dog left the family in tears after doing this. Details