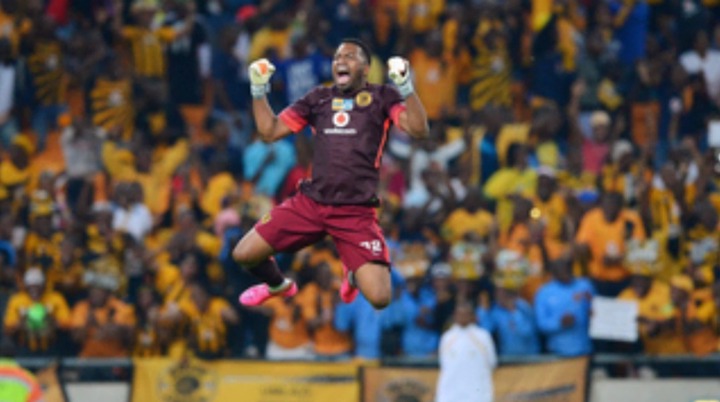 Itumeleng Khune is still highly popular, even as he nears the end of his career - and with good cause, given his excellence between the posts for well over a decade.

But the self-proclaimed 'Mzansi's Finest' must undoubtedly be put to pasture. As it stands, he appears to be out of it, with the Kaizer Chiefs goalie having not played regularly in a long time.

He last appeared in the season's first match, when Amakhosi fell on penalties against Mamelodi Sundowns in the MTN8 first round. And his loss in the shoot-out may be proof that his finest days are behind him.

Wasn't Khune, after all, the king of shootouts in the past, assuring that the Chiefs would win if a game went beyond the customary 90 minutes and extra time?

South African football fans voted for Khune to be the Warriors' goalkeeper in Saturday's DStv Compact Cup semi-final against Amabutho, indicating that he is still reaping the benefits of all those years as the show's star.

It's not surprising, given the nature of the competition, which was created by the Premier Soccer League to provide some local action during the hiatus caused by the Africa Cup of Nations, which is presently being held in Cameroon.

In a country where football fans can't seem to look past their favorite team, gimmicky voting competitions are certain to produce absurd results, such as an inactive Khune making the starting lineup.

Take nothing away from Khune; the Klerksdorp native once received almost a million votes for the similarly ridiculous Carling Black Label Cup, which was contested by Chiefs and their rivals Orlando Pirates.

However, you have to worry what this means for young goalkeepers hoping to make it big...

Bruce Bvuma, the Chiefs reserve goalkeeper who has waited an eternity for a chance to play, must be wondering whether his chance will ever come.

Even in this Compact Cup, he finds himself on the outside looking in because to Khune. In the Warriors' lineup, he is the other goalkeeper.

The Warriors roster, which includes players from the Chiefs, Pirates, Swallows, and TS Galaxy, is likely to be dominated by the first two teams due to their large fan bases.

As a result, younger goalkeepers like Jody February and Marlon Smith have risen to prominence.

Heugh of Swallows and Galaxy, on the other hand, had no chance of making the cut.

The PSL and DStv have been congratulating themselves on this Compact Cup invention, which will see a fan win R1 million for participating in the voting. It's great for them.

However, the reality is that we are holding these events because our football team is terrible.

We are not at the Afcon because of our poor level of play, and a competition like the Compact Cup will do little to change that. Not when supporters who only see the positive in their clubs get to choose starting lineups and semi-retired old stars get to play ahead of promising young players who can handle the activity.

The PSL will undoubtedly argue that the national team's failures are unrelated to them and that it is the responsibility of the South African Football Association (Safa) to ensure Bafana Bafana qualify for competitions such as the Afcon.

That may be true, but in actuality, everything the professional league does should benefit the national team.

The DStv Compact Cup appears to me to be nothing more than a kick around aimed to entertain fans while firmly entrenching the broadcaster's control on the professional game, much like Warriors fans saw nothing wrong with their goalie choice for Saturday's match.

I recall Khune putting on a show versus Sundowns in a cup final at the Moses Mabhida on a Saturday night a few years ago. What are the odds that 'Mzansi's Finest' would turn back the clock this weekend to show that he is far from done?