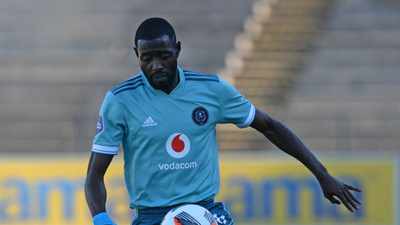 ORLANDO Pirates will give up their crucial Caf Confederation Cup match with high spirits after beating Stellenbosch 3-0 in the DStv Premiership on Wednesday.

For a long time the Blacks did not win and their coaches, Mandla Ncikazi and Fadlu Davids, sang a single hymn of dullness over creating a lot of scoring opportunities.

The Stellies were the ones to carry the basket before the game because they were in the best position on the log and have not lost in the league since the start of the season.

But Collins Makgaka's goal and two Deon Hotto goals came from the Blacks in the game at Danie Craven Stadium in Stellenbosch.

"I'm very happy with the way we played, especially in the first 15 minutes," said Davids. “We used to start well and manage the game in the first 30 minutes but this time the difference was that we were able to score goals.

Davids believes that winning Stellenbosch will strengthen his team as they prepare for the group stage qualifiers against LPRC Oilers of Liberia.

The first leg will be played at the Samuel Kanyon Doe Sports Stadium in Monrovia on Sunday afternoon at 6 p.m., the second will be at Orlando Stadium on December 5. The winning two-legged team will advance to the group stage.

"It was important for the players to win the game because previously we played well but did not get the results we wanted," said Davids.

“We didn't score the goals we needed but we didn't give up, we just kept going.

“If you work hard, you will eventually be lucky and get the reward for your hard work. It was unfortunate that we were unable to score four goals but I really enjoyed the players.

"Now we are looking at the Caf game. We have an important job waiting for us in Liberia. We have to get a good result to get into the group stage.

"There are players who are not registered for this tournament so there will be changes. However, our focus now is to get a good result on the move."

The Buckeyes knocked out the Diables Noirs of Congo to reach this stage, the LPRC Oilers were eliminated from the Caf Champions League qualifiers.

The Marumo Gallants, who are bottom of the DStv Premiershp log, also in the Confederations Cup, will play TP Mazembe in DR Congo on Sunday at 4pm. The second leg will be in South Africa on December 5th.

The painful Funeral Of Makgolo From Mphahlele Royal Family.

Former Defender Reveals How Orlando Pirates Used Muthi on Them, See How

Lerato portrait by Thuli Phongolo to be written out of the show. Thuli has been shown the door.