Mamelodi Sundowns fight back from a goal down to earn a point against Marumo Gallants.

By ElisaShantee (self media writer) | 5 months ago 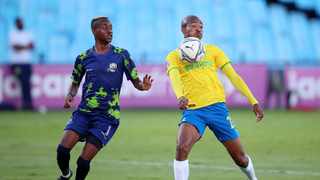 Ndabayithethwa Ndlondlo scored a penalty for Gallants shortly after the half-hour mark. Downs defender Ricardo Nascimento was adjudged to have handled the ball in his own penalty area, earning the penalty.

Sundowns goalkeeper Ricardo Goss dived correctly for the penalty kick, but the power Ndlondlo used meant that only a few keepers in the world could have saved his effort.

In the early stages of the game, Gallants goalkeeper King Ndlovu had luck on his side. Before the goalkeeper saved, Andile Jali sent in a good pass to Aubrey Modiba. Modiba found himself in a good position again six minutes later, but Ndlovu made a comfortable save.

Gallants had another counter shortly after, as Ndlondlo forced a save from Ricardo Goss.

Gallants came close to scoring on a breakaway. Sibusiso Khumalo was played in, but his shot deflected off the post.

Kapinga fired on goal from a free-kick early in the second half, but his effort lacked power, and Ndlovu made an easy save. In the 65th minute, a ball was played to Lerato Lamola, but the 35-year-old was unable to finish.

There is no doubt that Gallants will be the happier team as a result of the game's outcome. The Limpopo-based side was clearly resorting to time-wasting tactics towards the end of the game in order to save a point.

Sundowns will be disappointed after dropping two points and failing to capitalize on their opportunities. The hectic December schedule appeared to have taken its toll on Masandawana, as they were clearly exhausted.

While they will be disappointed with the results of their last two games, they still lead the log by several points.

When the league resumes on February 16th, both teams will be in action. Sundowns will play Chippa United at Loftus Versfeld, and Gallants will play Baroka FC at Peter Mokaba Stadium.

Married gay celebrities who have ended their marriage

An 11-year-old survived a shooting at school after she used someone 's blood to protect herself.

Here Is Everything You Need To Know Regarding Death and Horror

James Is Determined To Fix His Marriage #Muvhango "