Transfer window open, and Orlando Pirates is likely to bring these five players to join the squad

By MissMomo (self media writer) | 4 months ago 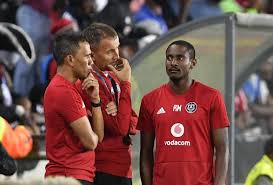 It is a new year, and Goal.com revealed the football players that Orlando Pirates are reportedly looking at during the on-going transfer window in the Premier Soccer League (PSL).

Can you guess which football players are likely to join Pirates?

The 2021/22 PSL mid season transfer window officially opened on 1 January 2022, this means that local clubs can now sign and register new players. In the publication feature, the publication profiled five players who are likely to join Pirates this month.

1. Chibuike Ohizu - the Nigerian-born striker hit the ground running in his debut season in the PSL, he scored five goals in his first seven matches in the competition for Sekhukhune United.

The former Jomo Cosmos player recently announced that he would be open to moving to another PSL club if he gets an enticing offer.

2. Evidence Makgopa - the towering marksman was expected to join Orlando Pirates from Baroka FC, along with his former teammate Goodman Mosele prior to the start of the 2021/22 season.

Pirates are reportedly revisiting their interest in the 21 year old in the current transfer window with a view of signining him and loaning him back to Baroka FC, for the remainder of the season.

3. Yusuf Maart - the Sekhukhune United captain has been one of the most consistent central midfielders in the PSL this season. The 26 year old, who is a former Pirates player has gone on to become a quality midfielder after leaving Pirates in July 2020, having made just one appearance in the PSL, for Pirates.

Pirates are said to be among the clubs to be interested in the Bafana Bafana international football player, who is contracted to Sekhukhune United until June 2023.

4. Thabo Nodada - the Cape Town City vice captain is among the central midfielder who are on Pirates' radar as they look to beef up their midfield. Pirates' interest in the player was confirmed by the player after the last transfer window closed.

5. Victor Letsoalo - the Royal AM centre-forward has become one of the hottest properties in the current transfer window. Orlando Pirates and their rivals Kaizer Chiefs have both been credited with an interest in the football player.