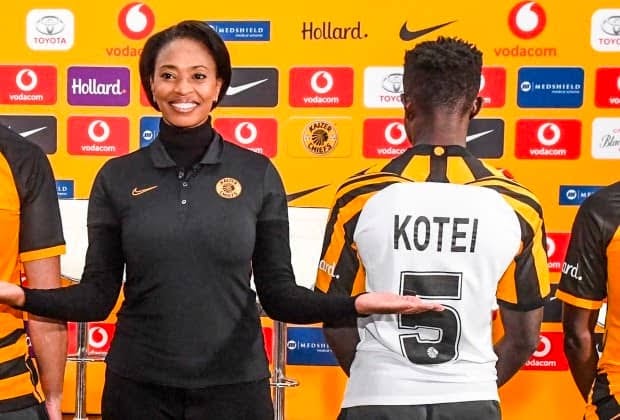 Jessica Motaung, Kaizer Chiefs Marketing Director, has intimated that the team isn't done in the transfer market because the window is still open.

In an attempt to overcome their seven-year trophy drought, the Chiefs have recruited eight new acquisitions and discharged a whopping 11 players, according to The South African.

Those purchased include Yusuf Maart, Ashley du Preez, and Zitha Kwinika, among others, and Motaung stated that if they bring in someone new, they will notify the public.

And Motaung is pleased that the Chiefs' choice to restructure the roster and add new players has aroused interest among club supporters.

According to media sources, the Chiefs are in talks with at least two additional players, Braga midfielder Kobamelo Kodisang and Golden Arrows midfielder Pule Mmodi.

KAIZER CHIEFS MAY NOT BE TRANSFERRED IN THE TRANSFER MARKET

"The signing period is still open." So, when everything is finished, we will notify you, but if there are any fresh announcements, they will be made public," Motaung told Sowetan.

"I'm delighted the supporters are enthusiastic, and I believe it's vital that they are a part of the journey."

"We want them to support the players that we bought together, and we are also delighted that with the way things are looking, we now have 100 percent of the fans at the stadium." So we're really excited for the new season to begin," Motaung added.