BafanaBafana defender brought troubles for a Portuguese club and they were beaten 7-0. 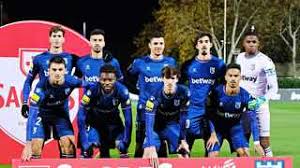 Thibang Phete plays for Belenenses, a Portuguese team alongside his fellow South African man, midfielder Sphephelo Sithole. When Phete returned to Portugal from his Bafana Bafana duties, he brought with himself Corona virus, testing positive and since then 17 others among the club’s players and staff have also tested positive. Belenenses was forced to field nine players in their home league game against Benfica due to Phete testing positive.

“We had eight players who could participate in the game and as such they told us that if we didn't attend the game it would be an unjustified absence. Playing here today was a shame for all of us,” Belenenses President Rui Pedro Soares criticised the league for making the game continue.

Belenenses were forced to use Joao Monteiro goal keeper as a midfielder. They tried to have the game cancelled though. They were beaten 7-0 in the first half and in the second half, they came with seven players. The match was abandoned two minutes into the second half after Monteiro could not carry on playing and Belenenses.

Say these Prayer Points To Our Heavenly Father For Breakthrough

Say these Prayer Points To Our Heavenly Father For Your Children

Say these Prayer Points To Our Heavenly Father For Redemption