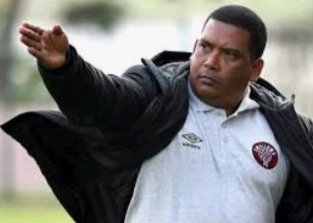 Coach Brandon Truter was placed on special leave for two matches, for performance reasons and some other hazey reasons.

His assistant coach who had just arrived at the club by then, was assigned as a head coach for those two games.

It came as a surprise to many, because even though Truter had just lost 3-0 to SuperSport United before the decision to placed him on special leave was made, soccer fans still believed that, judging by his performance since he arrived at DStv Premiership league last season, he didn't deserve such drastic decision.

However club's management didn't view it like that, hence they went ahead and placed their rookie coach Simo Dladla in the deep end of the things.

However, that worked against the team, as their rookie coach was helplessly humiliated in both games. The team conceded seven goals in two games and they could not score even a single goal, under coach Simo Dladla's tutelage. It is even worse when one considers the fact that the same Brandon Truter helped the team to the MTN8 semi's. And even managed a draw on the first leg and only to be taken out and in was someone who took them out of the cup.

Brandon Truter might be back, but the damage is done already. They are out of the cup competition. Who knows that maybe if it was not for the harsh decision taken against their coach, the club would go on to win the cup.

Coach Brandon Truter returned with a game against Stellenbosch FC. The game ended with a draw of 1-1.

It is indeed an improvement from the two previous performances under coach Simo Dladla.

But looking at some of the decisions by the man in the middle of the pitch, one might say this game should have been won by Stellenbosch FC.

Because the same player, Ruzaigh Gamaldien who scored the solitary goal for Swallows FC should have been out on straight red card due to the career ending tackle he made on one of Stellies players, before he could even score the goal.

Anyway, we all know that things like those happen in our beautiful game, hence the results will stay.

Have your say let us hear your views on this issue and don't forget to like and follow us.