SuperSport jumps to second place, there is late drama.

By Phillipkitimi (self media writer) | 10 months ago 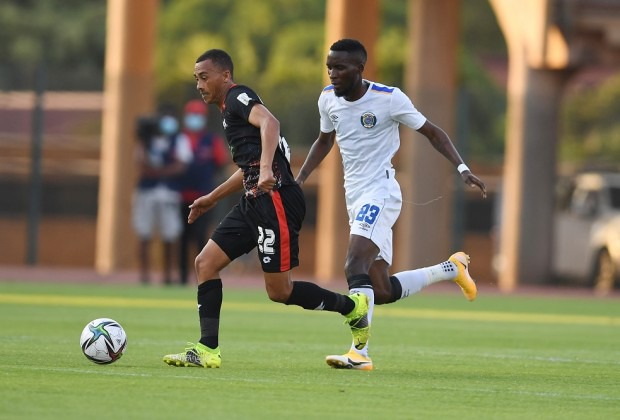 Rowan Human, Thobeka Zondi, and Nazeer Allie were brought into the Maritzburg starting lineup, while SuperSport made no changes.

In the early minutes, SuperSport's high press was beginning to rattle the Team of Choice, and Moses Waiswa won the ball back for Matsatsantsa high up the field before passing to Jamie Webber, who opened his body brilliantly and curled one just wide of the left-hand far post.

The hosts took advantage of their superiority to gain a merited lead, which came from a set-piece after Riyaaz Ismail conceded a corner. Thamsanqa Gabuza climbed above his marker to glance the ball into the bottom left-hand corner after Webber delivered to the back post.

In the 24th minute, Maritzburg had their first chance. Daylon Claasen recovered control high up the pitch and found Amadou Soukouna, who took a touch off his foot before firing straight at Williams, who was gathered low.

Soukouna stepped up to strike himself after winning a foul on the edge of the box in the 34th minute, forcing Williams into a smart stop low to his left.

The lights at Lucas Moripe Stadium went out around the 55-minute mark, causing the game to be delayed for 15 minutes.

When the players returned to the field, it was Maritzburg who had the upper hand, and they took advantage of their prolonged pressure with an equaliser just before the hour mark, when Hlongwane fired home after Soukouna's shot had been blocked.

Matsatsantsa was awarded a free-kick after Alfred Ndengane handballed on the edge of the box. With Maritzburg goalkeeper Marcel Engelhardt glued to the spot, Webber took a shot that went an inch beyond the bar.

Six minutes from time, Hlongwane sprinted 40 meters with the ball for Maritzburg and played Brandon Theron in the box, but Thatayaone Ditlhokwe came over to make a last-ditch challenge.

SuperSport snatched a thrilling victory in the final play of the game when Ditlhokwe headed home at the far post from a Sipho Mbule corner.

Steven Pienaar gushes over his twins, see their adorable pictures below.