The Premier Soccer League (PSL) have slapped a R100,000 fine on Cape Town City after being found guilty of playing without registration cards. 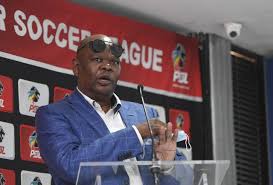 After team manager Moenier Davids’ car was broken into; all his belongings, including the players’ cards were stolen ahead of their home clash against Maritzburg United.

There was a delay due to the ordeal as the Citizens were without their original playing cards but the game eventually went on and played under protest before their 3-2 victory.

When is 21st of this month admin? i want to set my alarm plz tuu,i want to be there when he deal with certain team, those points must be docked oArthur Zwane sebesingxolela about winning the league.

You can see that this is hyena from politics, What Cape Town City would have done in a short space of time? He knows that criminals have taken control of South Africa but he act as if he is from heaven.

A car was broken into and cards were stolen how is that a fault of the club, this celebrity lawyer.

As much as I feel the fine is stiff, it would have been an injustice if they were docked the three points. Maritzburg were catching at straws. Well done Majavu.

He must not act too swift. Let covid FC stew for a little while and punish them after match day 30.