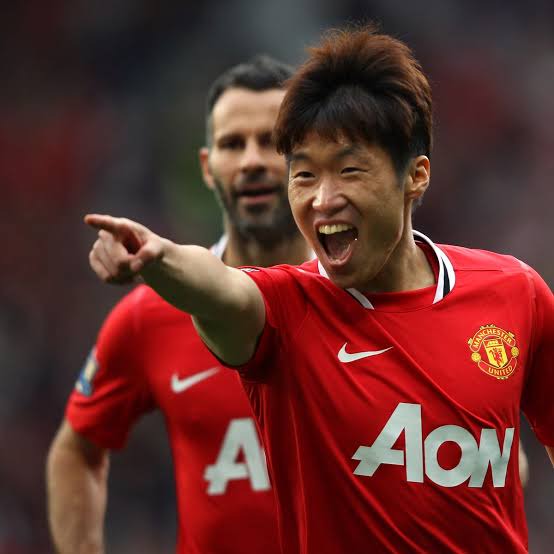 Park Ji-sung (born 30 March 1981) is a South Korean former professional footballer who played as a midfielder. He currently serves as a club ambassador for Manchester United, for whom he played from 2005 to 2012. Born in the South Korean capital Seoul, Park is one of the most successful Asian players in history, having won 19 trophies in his career. He is the first Asian footballer to have won the UEFA Champions League, to play in a UEFA Champions League final, as well as the first Asian to have won the FIFA Club World Cup. Park was able to play anywhere across the midfield and was noted for his exceptional fitness level, discipline, work ethic and off-the-ball movement. His remarkable endurance levels earned him the nickname "Three-Lungs" Park.

Park received much acclaim at Manchester United for his speed, off-the-ball movement, work rate and energy, which saw him deployed all over the midfield, including in the middle of the pitch, in a holding role, in a box-to-box role or on either wing, where he operated as a defensive winger, incessantly pressing the opponent players. He was also capable of playing as an attacking midfielder, or even in a more advanced role as a second striker on occasion. Moreover, Park was known as a big game player, as he was often used by Sir Alex Ferguson in big league games or European games where there was an extra emphasis on defensive work.

In his 2013 autobiography, I Think, Therefore I Play, Italian midfielder Andrea Pirlo wrote that Park, who was deployed to man-mark him in matches for both PSV and Manchester United in the Champions League, was the one player that he could not get the better of. Pirlo wrote of Park, "The midfielder must have been the first nuclear-powered South Korean in history, in the sense that he rushed about the pitch at the speed of an electron." 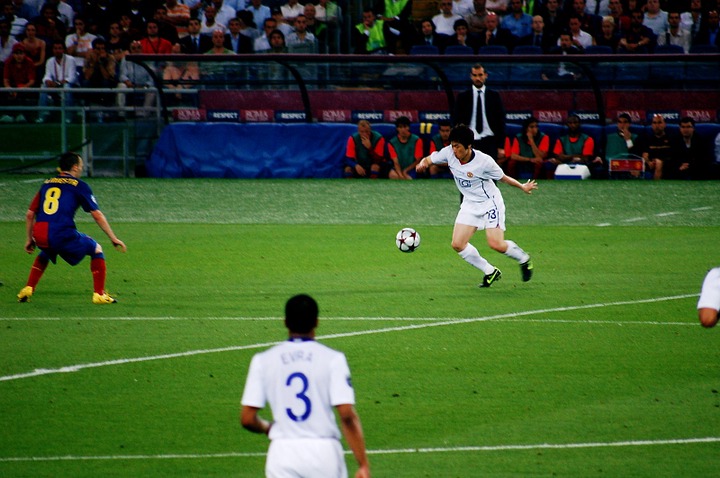 In May 2020, former teammate Wayne Rooney said that Park was as important to the Manchester United side of 2006–2009 as he and Cristiano Ronaldo were, commenting: "It's crazy but if you mentioned Cristiano Ronaldo to a 12-year-old, they would immediately say, 'Yeah, he was a brilliant player for Manchester United.' But if you said 'Ji-sung Park' they may not know who he was. Yet all of us who played with Park know he was almost as important to our success. That's because of what Park gave to the collective and I want to talk about teams. They – not stars – are the most important thing in sport. People say our United team had all these great players. In reality our biggest strength was as a pure counterattacking machine. We would sit back in our shape, win the ball and just go. Park or Fletch [Darren Fletcher] – or both – were always involved. They were vital to us. Players like me, Ronaldo, Tevez got the headlines but they [Park and Fletcher] were as important as us if not more, because of what they did for the team. We knew that inside the dressing room — and also that because they were so good at sacrificing themselves, their actual individual quality was often overlooked."

Park began his football career in his native South Korea and played for the Myongji University team before moving to Japan to play for Kyoto Purple Sanga. After Park's national team manager Guus Hiddink moved back to the Netherlands to manage PSV Eindhoven, Park followed him to the Dutch side a year later. After PSV reached the semi-finals of the 2004–05 UEFA Champions League, Park's talents were recognised by Manchester United manager Sir Alex Ferguson and he signed Park for a fee of around £4 million in July 2005. In his time at United, Park won four Premier League titles, the 2007–08 UEFA Champions League, and the 2008 FIFA Club World Cup. He moved to Queens Park Rangers in July 2012 after suffering a reduction in his number of appearances for Manchester United the previous season. However, an injury-interrupted season with QPR, combined with the club's relegation, led to Park rejoining PSV on loan for the 2013–14 season.

As a member of the South Korea national team, Park won 100 caps and scored 13 goals. He was a member of the team that finished fourth at the 2002 FIFA World Cup, and also represented his nation at the 2006 FIFA World Cup and the 2010 FIFA World Cup. At the World Cup, he was named man of the match four times, the most of any Asian player, and is currently South Korea's joint all-time leading World Cup goalscorer with three goals alongside Ahn Jung-hwan and Son Heung-min, having scored in three consecutive tournaments.

On 25 July 2014, Park participated in the K League All-Star Game, and was named the Most Valuable Player with a goal.

On 5 October 2014, it was announced that Park was to take up a role as a global ambassador for Manchester United.

In 2016, Park attended De Montfort University to read sports management with a view to coaching in the K League. He began course studies for The FIFA Master - International Master in Management, Law and Humanities of Sport, which he graduated from in July 2017.

In June 2018, he became a football commentator of a South Korean broadcasting company SBS, and commented on South Korean games during the World Cup.

On 19 January 2021, he joined a K League 1 club Jeonbuk Hyundai Motors as the adviser to help the selection, nurture, scouting, and training system of players.

7 Foods You Should Avoid If You Are Suffering From Heartburn

They Are threatening To Kill Me, After My Brother Got Assignated- Sizophila Mkhizw Cry Out

Top 10 Accounts of Cannibalism That Will Freak You Out

Zimbabwe has Asians as part of Olympic team?