By romsy (self media writer) | 1 year ago

It all happened in Budapest,Sergio Deist was one of the players who impressed in Budapest . However ,others have their say on who was the best as you hear what the fans had to say , 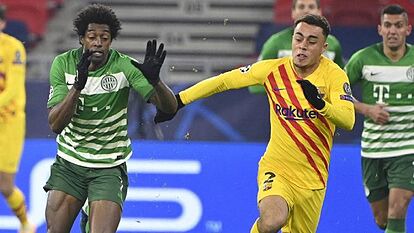 " Perhaps one of the brightest players in the first half, Dembele was involved in the build up of the first goal ,set up the second and converted the penalty for the third .The French international was on it from the start ,clearly motivated to perform," says fan number 1

" Another Barcelona attacker who is producing the goods at the moment Brathwaite,met Dembele's cross to score goal and won the penalty that led to the third ," says fan number 2

" With Ferencvaros not really threatening down his side ,the American international took the opportunity to get forward as soon as possible .When in the opposing third his crosses caused the hosts plenty of problems ," says fan number 3

What do you have to say about this match ,who was the brightest player on your part ?

Content created and supplied by: romsy (via Opera News )