At Orlando Stadium, the second leg of the CAF Confederation Cup semi-final between Orlando Pirates and Al Ahli Tripoli will take place in 2021/22. 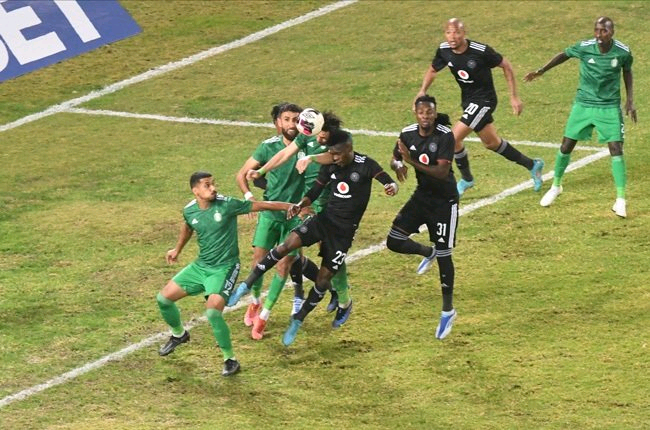 Even though they lost 1-0 to Al Ahli Tripoli of Libya in the second leg of their semi-final, Orlando Pirates made it to the CAF Confederations Cup final on Sunday.

Pirates took a 2-0 lead in the first leg, which was played in Benghazi last Sunday, and won the match 2-1 overall. This will be their second time in the final of the second-best African competition.

Tripoli looked like they had no chance of winning after losing at home, but they were the better team in the return match, especially in the first half on a cold, wet night in Soweto, which is near Johannesburg.

But with 89 minutes left in the game, Libyan substitute Ali Abu Arqoub scored to set up a tense finish that included four minutes of extra time.

If Tripoli had scored a second goal, the semi-final would have gone to a penalty shootout. However, the tired visitors never looked like they were going to score a second goal at Orlando Stadium.

The penalty decision was changed.

Ahly dominated the first few minutes of the game, and Pirates captain and center-back Happy Jele gave away a penalty when he handled the ball.

The Gambian referee pointed to the spot, but he changed his mind after looking at what happened on the VAR monitor on the sideline.

Even though replays showed that the ball came off Jele's foot and touched his right hand, the referee probably thought it was a ball-to-hand situation and not the other way around.

Ghana-born Richard Ofori, the goalkeeper for Pirates, was much busier than Muhammad Nashnoush, who played for Tripoli. Ofori made acrobatic saves and parries to stop Tripoli many times, while Nashnoush was a virtual spectator.

In the first 45 minutes, Pirates' only chance to score came from a free kick that got past Ahly's defense, but Jele, who was alone, missed the ball.

A series of substitutions helped the Pirates get better in the second half, while the Ahly team, which was used to playing at sea level, got worse as they tried to play at 1,632 meters above sea level.

Arqoub had just gotten off the bench when he scored. He grabbed a loose ball outside the box and took a shot that Goodman Mosele slightly deflected before it went into the goal.

In northeastern Morocco, Bakr el Helali put Berkane ahead in the 10th minute, but it only lasted 60 seconds before Phillippe Kinzumbi tied the game.

Mazembe was down to 10 men when Tandi Mwape was sent off in the middle of the second half. The late goal rush started when Renaissance's captain Larbi Naji put his team in front for the second time.

Youssef el Fahli scored from the penalty spot in the 88th minute to put Berkane ahead overall, and he scored again in the 96th minute of extra time to make sure of the result.

Berkane won 4-2 overall, even though they lost the first leg 1-0 after giving up a goal in extra time.

Berkane won the Confederations Cup in 2020, while Etoile Sahel of Tunisia beat Pirates to come in second place in 2015.

This Friday, the final will be held in the Nigerian city of Uyo.

The second legs of the CAF Confederation Cup semi-finals on Sunday:

Berkane is in Morocco.

Pirates win overall by a score of 2-1

Chiefs target extends his contract with his club until 2025