Seven players announced for player of the season nominees

Individual players showed thier optisim in the contest of the English Premier Season 2019/2020 season campaign as they helped thier teams to stay in league as some helped their teams to cliam the tittle. 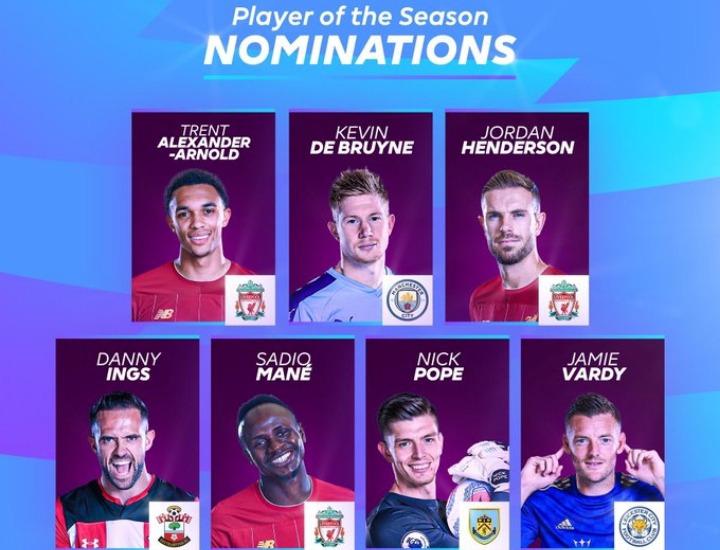 Thes stakes are high on wether who will be named Premier League 2019/2020 player of the season as there are seven players contending for the individual award.

Three Liverpool Football Club LFC Sadio Mane, Captain Jordan Henderson and defender Trent Axendra Arnorld have been selected amongst the contenders of the player of the season individual award. The three Anfield stars have helped thier team to go all the way and win the title as they contributed with thier stella perfomance through out the season.

Manchester City tallisman Kervin De Bryune has made it to the nomanitions of his great contribution with a record breaking of 20 assists for the Citizens.

Burnley shotstopper Nick Pope has been vital to the team after he made 16 clean sheets for his side keeping them in the league. He is the only Goalkeeper nominated for player of the season.

Vardy ranked high with 23 goals scored for the season and he got the golden booth and helped his side to book a spot in the Europa Leaguen in the next campaign.

Danny has made top notch perfomance after he helped his scoring over 20 goals for the tean as they managed to participate in the league next season.

However some call for the young defender Trent to be named player of the season has his been consistent for the whole season with the assist he made as a defender.