Eben Etzebeth, a Bok enforcer, says he would like to play in the Six Nations. 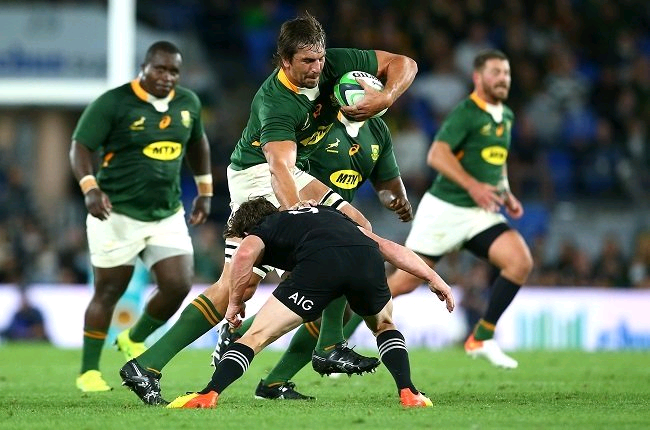 Etzebeth, on the other hand, says he still wants to play against New Zealand, Australia, and Argentina.

He has suggested playing the All Blacks in a three-Test series as an alternative.

In recent months, there has been a lot of talk about the Boks' possible future in the Six Nations.

Even though Sanzaar, the governing body of rugby in the southern hemisphere, said in February that South Africa would keep playing in the Rugby Championship until 2025, there have been rumors that the Boks could join the Six Nations after 2025.

The Bulls, Lions, Sharks, and Stormers, South Africa's four best teams, already play in the northern hemisphere's United Rugby Championship, so Etzebeth thinks it would make sense for the Boks to do the same.

In a video for Rugby Pass, the player with 97 Tests said to Jim Hamilton, "I think the Six Nations will be good for us." "It makes sense, since we are playing in the URC right now against the same competition."

Etzebeth also suggested bringing back the traditional tours, which could include a three-Test series between the Springboks and All Blacks.

"But you still want to play New Zealand and Australia, and it's clear that Argentina is a good Test match as well. We usually play Scotland or Wales in June. Instead, we could play a full June series against New Zealand, play in the Six Nations, and then go to Australia or Argentina at the end of the year.

"I would love to join the Six Nations, but I would also love to play New Zealand and Australia every year. World Rugby might be able to find a good balance. In the end, all I care about is playing for South Africa."

The Springboks and the All Blacks haven't played a three-Test series against each other since 1996. The All Blacks won that game 2-1, and it was the first time they had ever won a series on these shores.

Before that, the Boks had won one series against their biggest rivals on the road, in 1937.