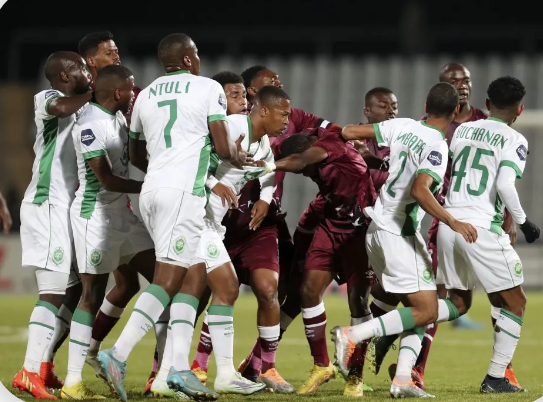 Swallows were defeated 3-2 by AmaZulu in a hard-fought DStv Premiership match at the Dobsonville Stadium on Friday night.

It was a physical match, with the teams colliding several times, and both sides were fortunate not to have players sent off.

Lindokuhle Mtshali shot wide in the fifth minute, and Waseem Isaacs nearly caused trouble two minutes later, but Veli Mothwa was able to race out of the box and clear as the Swallows man threatened.

In the tenth minute, Gabadinho Mhango had a fantastic opportunity for Usuthu but shot high and wide. Two minutes later, Isaacs had another chance at the other end but headed Yagan Sasman's cross just wide of the target.

Tshediso Patjie's attempt in the 19th minute was deflected behind, and Mtshali's header from the next corner was quickly saved by Mothwa.

Even though Swallows had the better early chances, Mhango scored the game's first goal with a skillful lob over Thakasani Mbanjwa in the 24th minute. Mhango and Keagan Buchanan worked well together to make the goal.

At the halfway point, Riaan Hanamub attempted a long shot, but it missed. Bongi Ntuli almost missed an opportunity to score in the 37th minute, and George Maluleka felt he had a penalty a minute later after colliding with Phelelani Mvelase during a tackle.

Three minutes before halftime, Swallows appeared to have tied the game when rookie Keagan Allan appeared to have headed in his first goal from Patjie's free kick, but Mbongeni Gumede correctly called it an own goal.

In the first minute of the second half, Isaacs headed wide, and in the 55th minute, Mtshali's free kick was on target, but Mothwa was ready for it and grabbed the ball out of the air.

When Mtshali was brought down in the area in the 63rd minute, Swallows was given a penalty even though it appeared Abubaker Mobara missed the tackle. After having his first goal disallowed earlier, Allan stepped and sent Mothwa the wrong way to score.

Mhango missed the target in the 77th minute, but Usuthu equalized a minute later on Mbanjwa's own goal after he mishandled Mhango's cross.

In the 83rd minute, Buchanan came close with a swerve attempt that nearly took Mbanjwa off guard once more, but the goalkeeper made an outstanding stop. He made another save from the same player a minute later as Usuthu sought for another goal.

Gumede scored at the right end for AmaZulu in the 90th minute, doing well to get in between the two defenders and head home Hanamub's cross.

Usuthu, who are unbeaten, become the first team to 10 points after their third straight victory and climb atop the DStv Premiership standings.