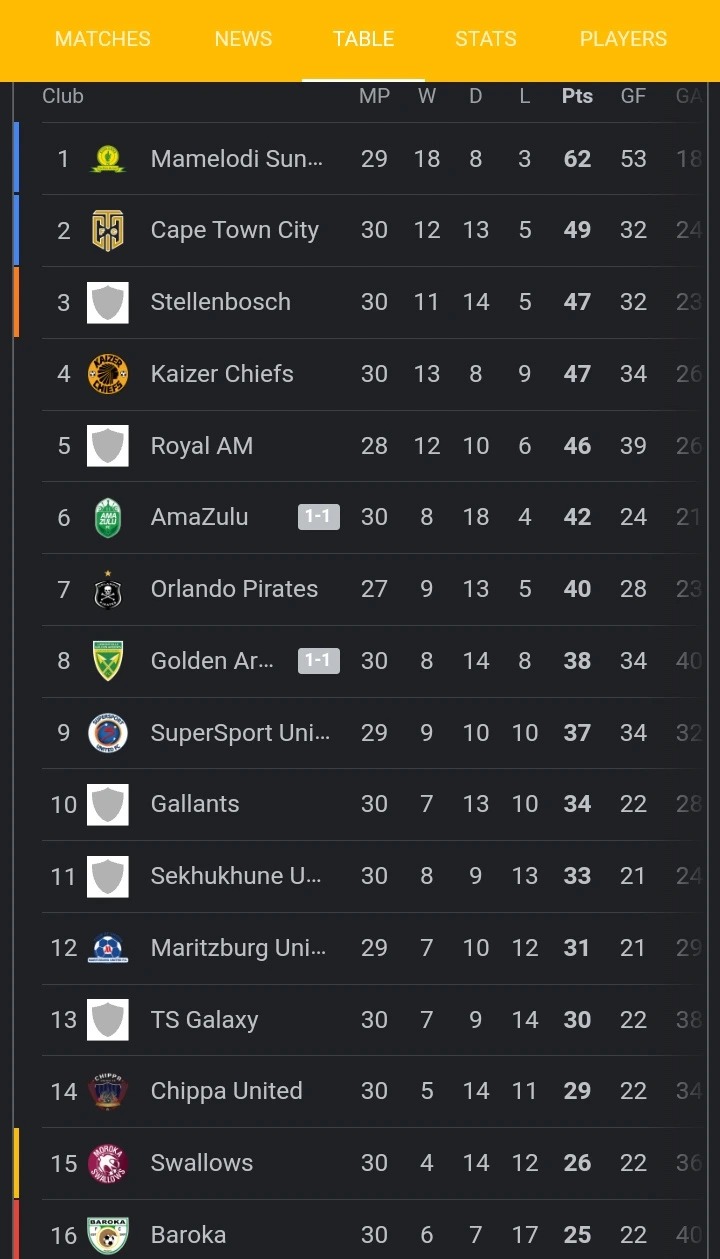 After this past Saturday's (May 21) slate of games, the standings in the Premier Soccer League (PSL) log table underwent significant reorganization.

While some teams were playing their final games of the season, others still had a handful of games remaining to play before their seasons come to a close.

The Mamelodi Sundowns were one of the clubs that were supposed to play their final games, but their match against Royal AM had to be postponed because of the significant rains that was occurring in Kwazulu-natal.

The Brazilians have not been dethroned from their position atop the standings log table, and the club has already ensured that they will win the league championship. After they have competed in their final game of the season, they will be presented with the DStv premiership trophy.

Despite suffering a loss at the hands of their local rivals Stellenbosch FC, Cape Town City stayed in second place in the standings.

The Citizens were unable to firmly establish themselves in second place, thus the club will have to keep their fingers crossed that other teams, such as Royal AM and Orlando Pirates, will make more mistakes.

After a successful match against the Citizens on Saturday afternoon, Stellenbosch FC earned a perfect score and moved into third place in the standings.

This season, the Stellies have accumulated a total of 47 points, and the club will be hoping that both Royal AM and Pirates will complete the season with fewer points than they did in order to finish the season in the top three.

Due to their defeat at the hands of the Swallows, the Chiefs concluded the year in fourth place.

After City squandered points against Stellenbosch, Amakhosi was unable to take advantage of the golden opportunity to go up to second place.

Heavy rains forced the postponement of Royal AM's game against Sundowns, which resulted in the team falling to fifth place in the standings.

After that, teams like Marumo Gallants, Sekhukhune United, and Maritzburg United finished their respective seasons outside of the top eight.

As a result of their victory over Chippa United, TS Galaxy were spared from being demoted, and the team finished the season in thirteenth position.

Despite their loss to Galaxy, the Chilli guys were spared from the elimination process.

Following a season in which they finished in 15th position, Swallows FC will take part in the postseason competition.

After ending the season in the worst possible position, Baroka was automatically demoted to the lower division.

3 Benefits To Dating A Widow: No.3 will change your mind