Mosimane has been connected with a number of opportunities since leaving Al Ahly, but he has yet to pledge his future to any club. 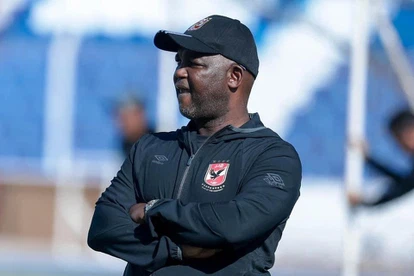 Mosimane joins Al Ahly in 2020 after enjoying success in both the Egyptian league and the CAF Champions League. During his first year with the club, 'Jingles,' as he is affectionately called, led the Red Devils to their first Champions League final in seven years. He would subsequently take them to three straight finals, two of which he would win. He also guided the team to back-to-back CAF Super Cup titles.

Mosimane coached Al Ahly to a record two consecutive FIFA Club World Cup bronze medals before leading the team to an Egypt Cup and an Egyptian Super Cup. Despite a difficult season, the club appeared to back the former Mamelodi Sundowns coach by awarding him a hefty new deal. The blemishes on the coach's record were the 2-0 Champions League final loss to Wydad Casablanca and a string of poor league finishes.

Following that, stories began to circulate that Mosimane was seriously exploring offers from the Middle East. Even if it was made to appear like a new position was approaching, if what he stated to KAYA959 is any indication? He does not appear to be in a hurry to return to football.

HE PROVIDES A FUTURE UPDATE

"I'm glad to take a break." I'm glad I woke up at 11 a.m., and I'm glad I'm not accountable to anyone right now. I'll return to coaching when I feel ready. Sometimes you have to take a step back. Big coaches, such as Pep Guardiola, have done it. Carlo Ancelotti has accomplished this. Zinedine Zidane has accomplished this. He won three Champions League titles but is no longer coaching." Mosimane spoke about his future.

Having said that, it appears that Mosimane is more interested in taking a break than committing his future to another team.