By CloudZero (self media writer) | 27 days ago

See what the Marumo Gallants coach had to say after his team was defeated by Sundowns in the Nedbank Cup Final. 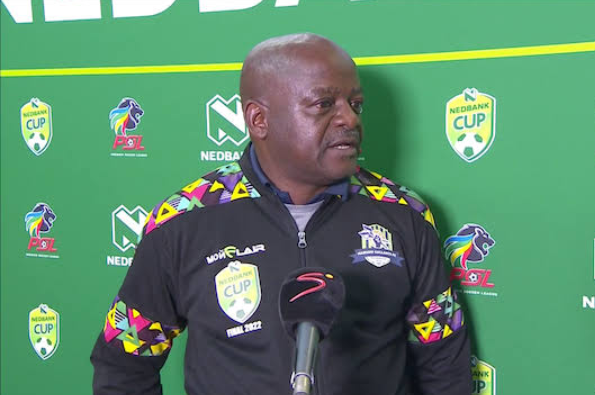 After Ndabayithethwa Ndlondlo was shown a second yellow card in the final ten minutes of extra time, Gallants were reduced to ten men, and that proved to be the deciding factor in the game since Thapelo Morena scored the game-winning goal in the final minutes.

"A extremely challenging game that, despite its difficulty, offers a lot of fun. When they watch a finale, most people undoubtedly want to witness this kind of thing. When they hear that there is a final, then they know that this is exactly what they want to watch, "According to what Malesela said on SuperSport TV,

"We were aware that it would be exceedingly difficult and require a lot of strategic thinking. We cautioned the players that any team who will make a lot of mistakes, or any mistakes for that matter, may lose, and you should know that we did it at the end.

"Due to the fact that we are all pressing high and attempting to put high pressure on the ball, they made several mistakes before that, as well as several mistakes themselves. At the very end, you should know, they made it out alive, but we did not.

"The fact that it takes place right at the end makes it more excruciating, but you understand that it's only a game of football, and you have to give the boys credit for entertaining you, which is priority number one.

"However, this contest is equally important for demonstrating character. I believe that people understand that we didn't get this far by accident and that we have earned our place here.

"To clarify, what I mean is that if he doesn't play, in the sense of having fun with it, then that football game won't happen. If you are going to be strict and say pass, pass, pass, let's play straight ahead, and everything else like that, then the South African footballer will not like playing football."