Chelsea or Real Madrid? Two giants On a race of Star But something surprising has happened

Chelsea have placed a transfer alert on Erling Haaland as Real Madrid make a major decision.

Haaland, a striker for Borussia Dortmund, is expected to be one of the most sought-after players when his buyout clause expires next summer, but Real Madrid are reportedly not interested.

We use your sign-up to provide information in ways you've agreed to and to learn more about you. Based on our understanding, this may involve advertisements from us and third parties. You have the option to unsubscribe at any time. more information.

Erling Haaland has rocketed to the forefront of the footballing consciousness over the last two seasons, with spectacular goalscoring for Red Bull Salzburg and Borussia Dortmund earning him a slew of fans, including Chelsea.

Haaland's combination of physicality, pace, great footwork, and goal-scoring ability has made him one of the most sought-after players in the world.

Real Madrid, Manchester United, Manchester City, Bayern Munich, and Paris Saint-Germain have all been linked with a move for the 21-year-old, and the competition for his signature appears set to be fierce, with a reputed €75 million (£63 million) release clause looming.

Chelsea were given a boost recently when it was claimed that Real Madrid had ruled out a move for Haaland, with Los Blancos assuming he wants to play in the Premier League.

Instead, the Spanish giants are reported to be focusing their efforts on Kylian Mbappe, who will be free to negotiate a pre-contract arrangement in January.

Florentino Perez spoke about earlier attempts to bring Mbappe to the Bernabeu in a recent interview with Spanish writer Ramon Alvarez.

"Players are not sold by state-owned clubs. It's a shambles, "he stated

"We've made an offer of €200 million (£168 million) for a single player, but they refuse to sell. It's great when players finish their contracts.

Perez continued, " "I've been struggling since returning to the club [in 2009]. There are numerous things that must be altered in some way.

Chelsea shattered their club record by bringing Romelu Lukaku back to Stamford Bridge for £98 million this summer, but their interest in Haaland is not considered to have waned.

Before suffering an injury, the Norwegian had scored 13 goals in ten games for Dortmund this season.

Despite the presence of Lukaku, it's difficult to imagine Thomas Tuchel not wanting a player of Haaland's caliber on his team. 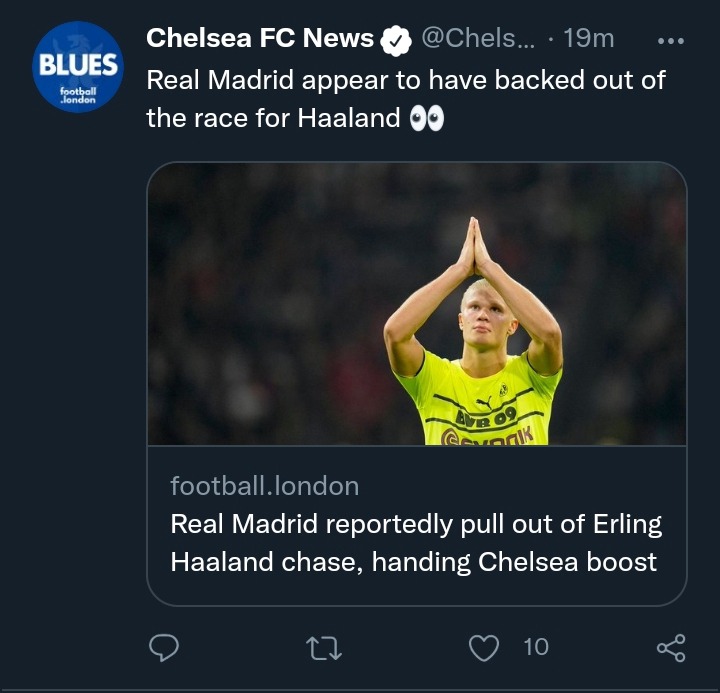