Rhea Ripley OUT For WWE Money In The Bank, New Title Challenger Named

By Wrestlinguy (self media writer) | 3 months ago

Rhea Ripley OUT For WWE Money In The Bank, New Title Challenger Named 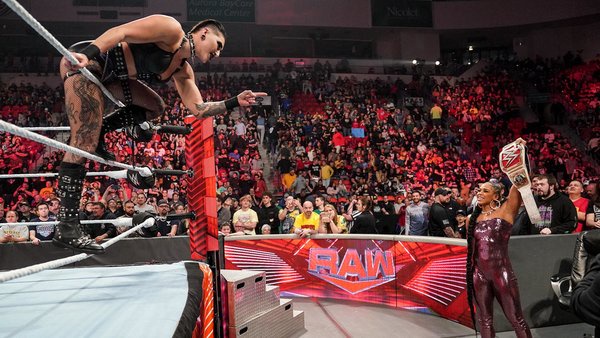 Rhea Ripley will miss the upcoming Money in the Bank PLE and is out for her Raw Women's Championship match against Bianca Belair.

The champion announced the development to open Raw, simply saying that Ripley would not be medically cleared to compete by MITB in 12 days, without expanding on it. She then said that a fatal five-way match would take place to determine her opponent: Becky Lynch versus Asuka versus Liv Morgan versus Carmella versus Alexa Bliss.

After a grueling promo train with all five women, the match got under way, with things beginning slowly. The match ramped up toward the end when everyone started hitting their finishers in rapid succession, only for someone to break up a pinfall. Finally, Carmella emerged victorious, earning a shot as the flavor of the month.

Carmella should suffice as a challenger less than two weeks out from Money in the Bank, as she likely wasn't going to be in the ladder match itself. Belair should be able to get a decent match that night and a guaranteed win.

Meanwhile, all eyes and ears are tuned in to see what is keeping Ripley out of action. She was just starting to get a renewed push as a serious threat as part of The Judgement Day, and now a mysterious "not medically cleared" designation. Best wishes to Rhea, that she is back in the ring as soon as possible.

Fortune Makaringe opens up about his struggles at Orlando Pirates

#MTN8 - will there be breathing space between Maluleka, Zwane and Maart?