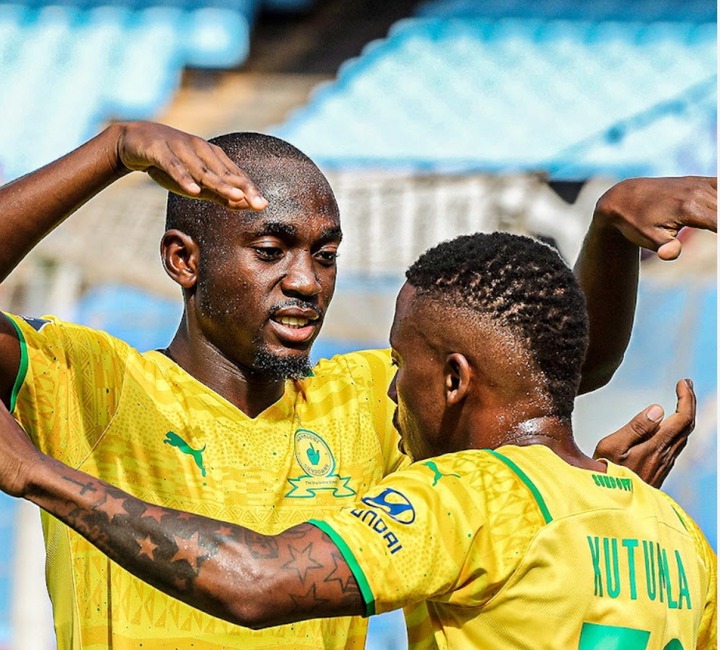 In a tense DStv Premiership match at Loftus on Wednesday afternoon, Mamelodi Sundowns were forced to work hard to earn a nervy 3-2 win over stubborn Royal AM.

This critical home victory has sent the Brazilians to the top of the standings with 34 points, and it has also assured that they are still unbeaten after 14 games this season.

After a goalless draw against AmaZulu last weekend, Royal AM has dropped points for the second time this season. They started the season with promise, mixing it with the early pacesetters.

Sundowns will attempt to keep their winning streak going when they go to Lucas Moripe Stadium to face SuperSport United in a Tshwane derby, while Royal AM will welcome Golden Arrows at the Chatsworth Stadium the following day.

After Royal defender Mzwanele Mahashe headed the ball into his path in a frantic attempt to clear a cross by Thapelo Morena, Sundowns seized the lead after six minutes when Thabiso Kutumela volleyed home.

Sundowns continued to press their opponents, and Nyame was forced to make a spectacular acrobatic stop after 21 minutes to deny Neo Maema, who rifled a strong shot from outside the box with his weaker right foot.

Sundowns goalkeeper Kennedy Mweene denied Tebogo Potsane after he was released by his skipper Ndumiso Mabena after Royal retaliated with an attack of their own a few minutes later.

A sliding pass from the midfield unleashed alert Mabena just before halftime, but his effort was parried away for a corner by Mweene, who had rushed off his line sensing the threat.

After 65 minutes, Sundowns extended their advantage with a tap-in from Shalulile, who connected with an excellent cross sent by their flying winger Morena.

After a magnificent attack that included man-of-the-match Andile Jali and Aubrey Modiba, Shalilule circled Nyame to score his second brace of the season after 73 minutes.

After being let free by a defence-splitting aerial pass from the middle, Shalulile was denied a hat-trick when his thundering shot ricocheted off the crossbar.

Substitute forward Victor Letsoalo scored his seventh goal of the season ten minutes from time, connecting with a cross from the left flank by Potsane after they caught the Sundowns defence off guard.

After referee Thando Ndzandzeka adjudged Rushine de Reuck to have touched the ball in the box from a cross by Motebang Sera, Letsoalo scored his second goal of the afternoon from the penalty spot.