Breaking| Money Mamkhize and Andile were flashing is NOT Theirs, Royal AM Employee Drops Bombshell

By NewsFlashMedia (self media writer) | 8 days ago

The money that Royal AM FC owners Andile Mpisane and Shawn Mkhize were flaunting last weekend is not theirs. They were not even supposed to be having it on the day.

These are the words of one for their employees, who has gone to clarify the scenes that shoot the country. 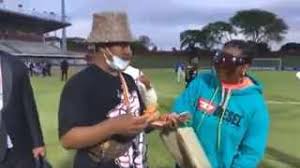 Royal AM chief executive Sinky Mnisi’s denial antics have earned him a new title as he is now considered the best spin doctor the country has ever seen.

Mnisi went on national SABC radio station Ukhozi FM on Tuesday to deny that the money flashed by club chairman Andile Mpisane and his mother Shauwn “MaMkhize” Mkhize was for bonuses.

A video of the duo calling players to ‘come collect their sweets’ trended at the weekend after Royal AM’s game against Maritzburg United. Phakaaathi understands that the players were not keen on being seen on camera collecting the loot and quickly escaped to the changeroom. 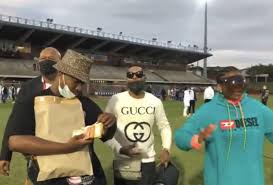 The action drew social media debates and some even called on SARS to look into the matter because if the players are given bonuses in cash it means they are not going to pay any tax.

Mamkhize and her son Andile have been criticized widely for their actions and their constant misbehavior at the stadiums when their team plays.

They have been spotted with a speaker playing loud music and dancing on the ground stands, going as far as the pitch dancing in the pitch after games.

The duo made it into the PSL after buying the status of Bloemfontein Celtic when the season started. They have since relocated relocated team to Kwa-Zulu Natal and renaming it Royal AM.

Upon buying the club, Mamkhize reportedly had a thought first month where salaries were delayed while some not getting paid at all.

She has reportedly fixed the mess and players are now said to be happy and paid on time.