Kaizer Chiefs and Chippa United have both released Gavin Hunt, who has been out of the DSTV Premiership for some months. Since leaving Bidvest Wits following their sale two seasons ago and signing for Chiefs, Hunt has been plagued by consecutive defeats, which led to his dismissal with just two matches remaining in the 2020/2021 DSTV Premiership season. 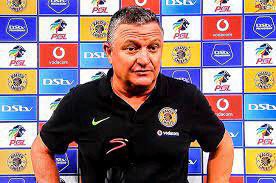 It was only a matter of time before he was sacked, however, that Hunt led the Chiefs into the CAF Champions League semifinals. He was later employed by Chippa United, who sacked him in the first half of the season and replaced him with Kurt Lentjies.

A coaching opening has just opened up at SuperSport United, and Hunt is the frontrunner to fill it following the firing of Kaitano Tembo. United's head coach, Hunt, has a successful record with the club, having led them to several titles. United may bring him back to Matsatsantsa, according to reports.

Although the club has yet to confirm the reports, Newsflash will keep you informed as more information becomes available.